" > Tottenham 1-1 Sheffield United: Spurs' slump continues after being held to a draw by the Blades - Pearl TV official site 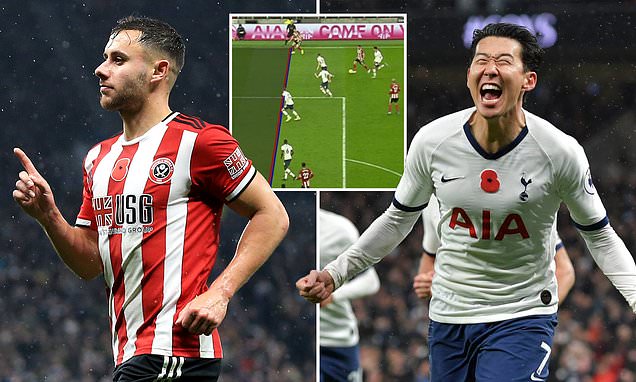 An incessant downpour at White Hart Lane was a fitting backdrop for the current gloom at Tottenham.

Even the latest VAR nonsense – Sheffield United were cruelly denied a goal after a three-minute check on Saturday – shouldn’t disguise the fact that Spurs are heading for a winter of discontent unless Mauricio Pochettino and his big players can change the mood fast.

This was Tottenham’s fifth Premier League game without a win, a run dating back to September. They’ve only won three league games all season – an awful record for Champions League finalists. 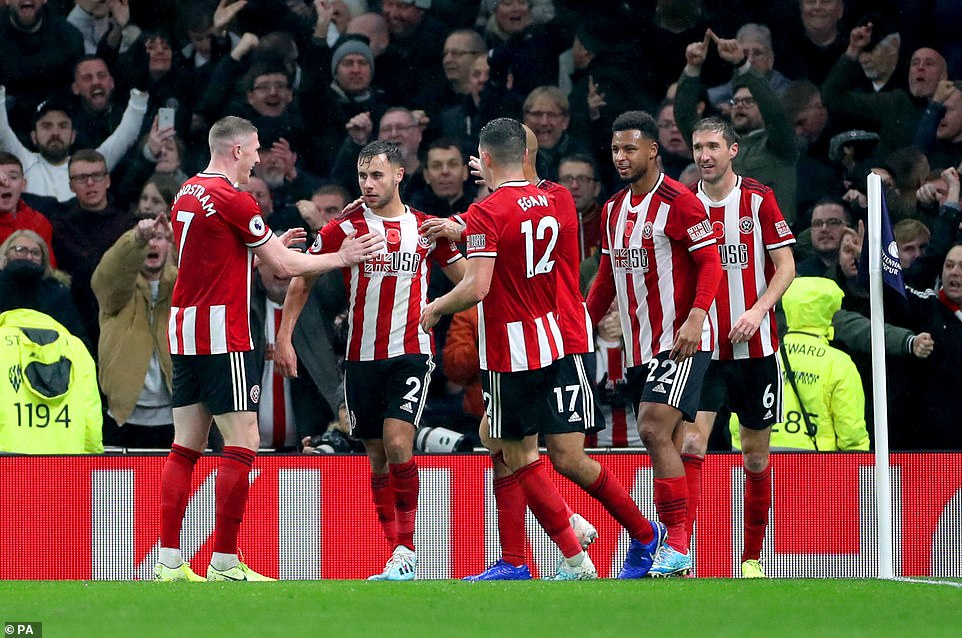 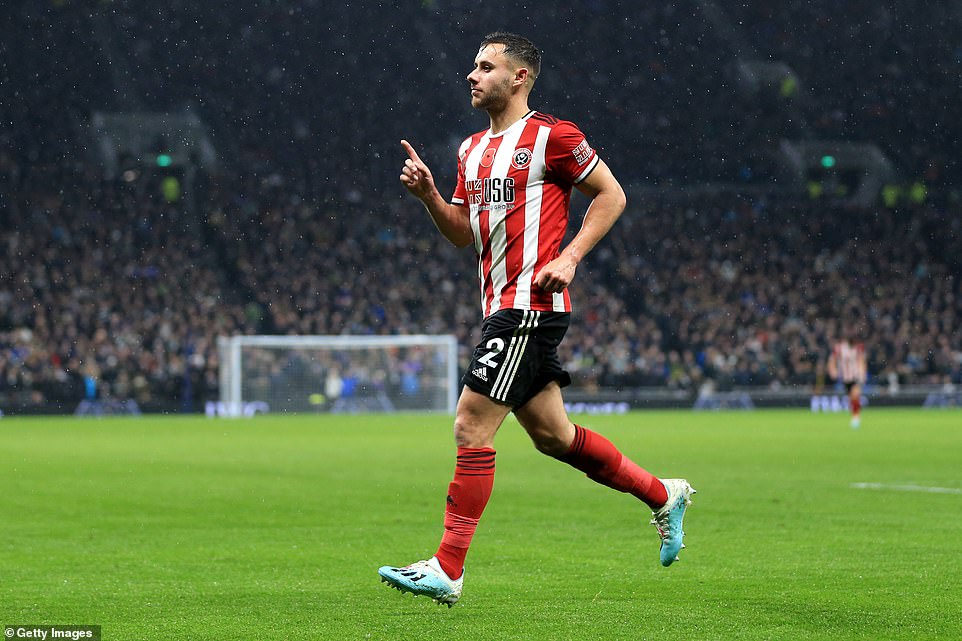 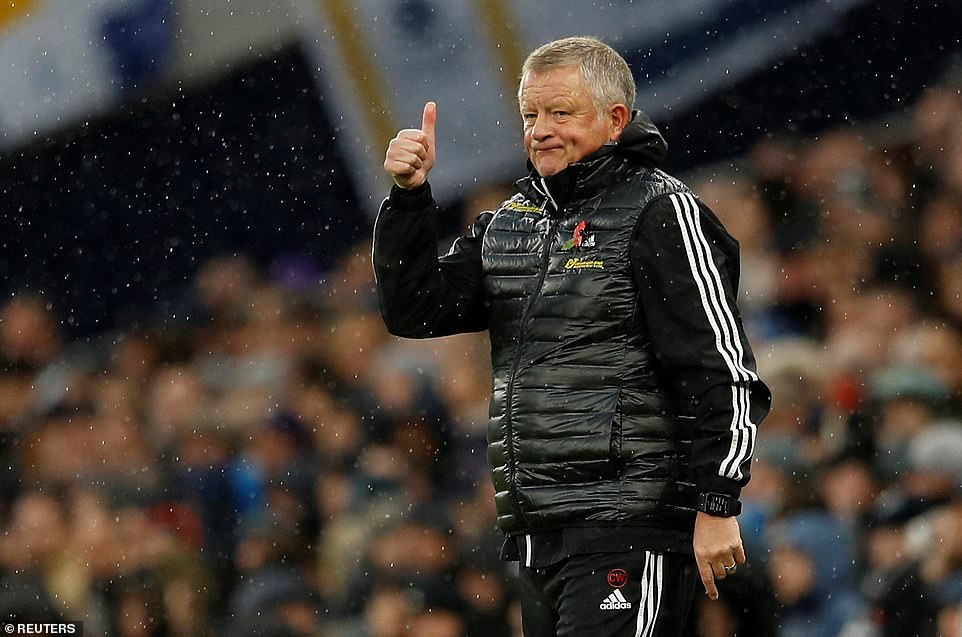 Chris Wilder’s men started the game in a positive fashion and took control of the game, later deservedly drawing level

Indeed, they could have lost this game, both because of their own performance and the dubious circumstances in which The Blades had a first equaliser chalked off.

Chris Wilder’s side are unbeaten away from home and certainly no mugs. But they didn’t have to play that well to get a draw here.

Tottenham’s goal, scored by Son Heung-min after 58 minutes, was from only their second shot on target and came from a Sheffield United blunder.

The home side then got lucky when David McGoldrick’s ‘goal’ on the hour was ruled out by a three-minute VAR check because John Lundstram’s big toe was judged to have been offside in the build-up. But they still couldn’t capitalise on the good fortune. 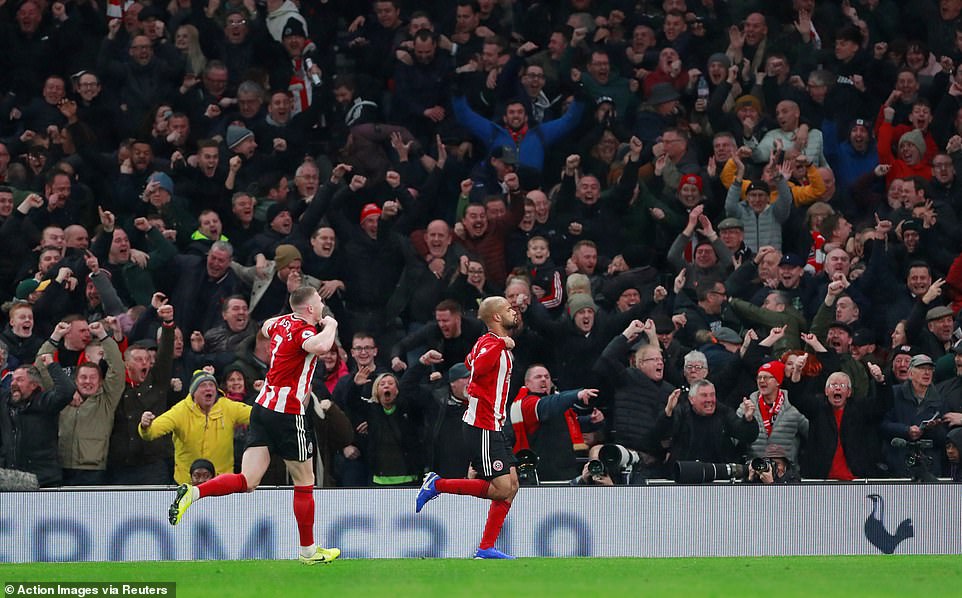 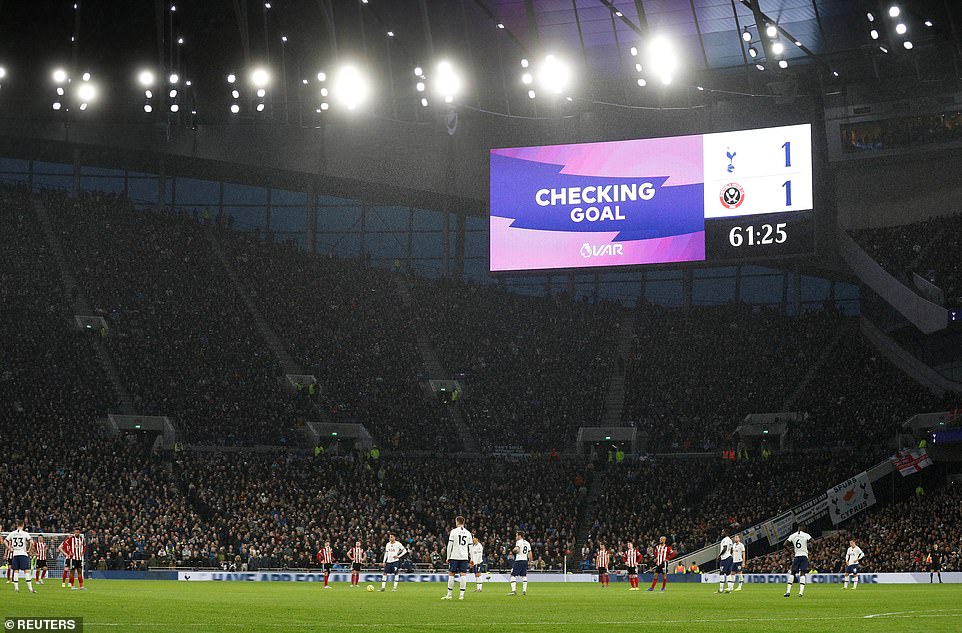 But following a lengthy VAR check on the goal, it was determined that there was an marginal offside in the build-up play 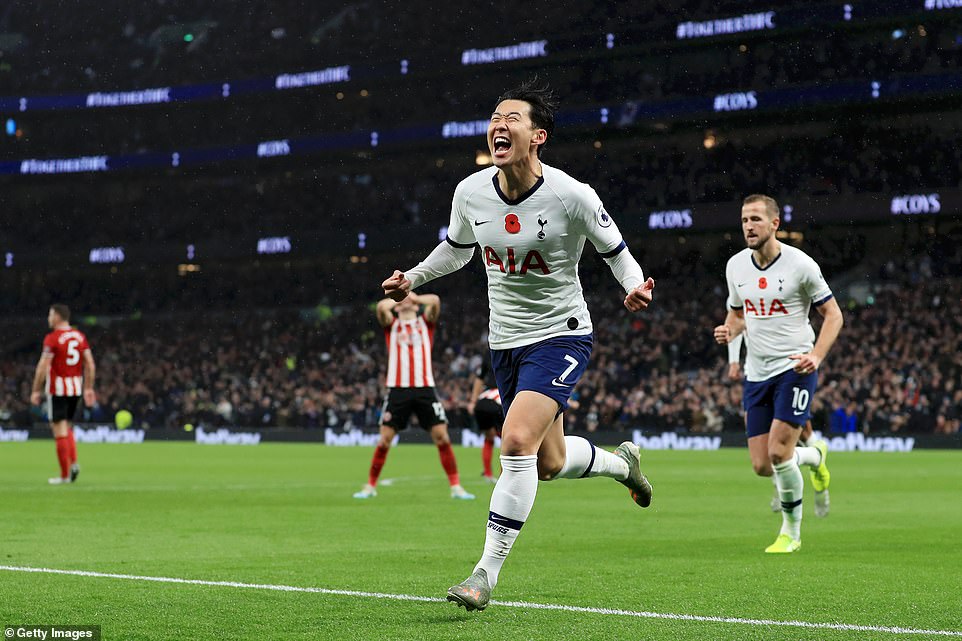 Spurs sat back and when George Baldock’s intended cross nicked off Ben Davies and sailed past Paulo Gazzaniga after 78 minutes, even another VAR check to decide whether Chris Basham had touched the ball from an offside position couldn’t deny the visitors.

‘Sheffield United are the worst opponents to have when you come back from a long trip in Europe but of course we are disappointed. It is not a good feeling,’ said Pochettino. ‘They were more aggressive. More focussed. We were a bit sloppy.’

Wilder was hopeful that another VAR farce – ‘John Lundstram’s big toe is bigger than it should be or whatever’, he said pithily – won’t take credit away from another great away-day for his players following on from a win at Everton and draw at Chelsea.

‘They filled me with immense pride with and without the ball,’ he said.

‘I see some teams sit deep but I think it’s a dangerous game to play. We want to take the game to opposition and score, not waiting to get beat.’ 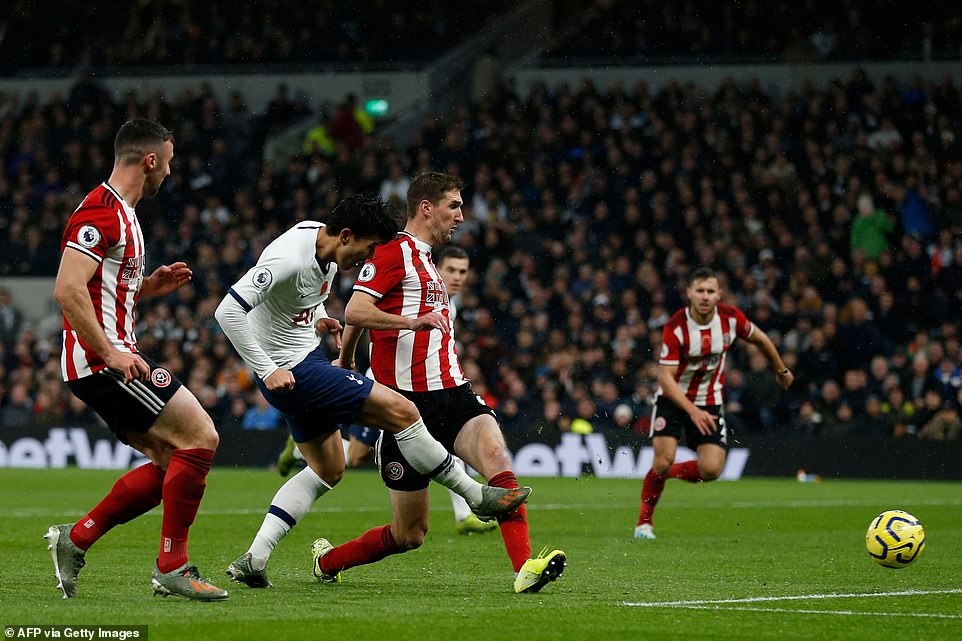 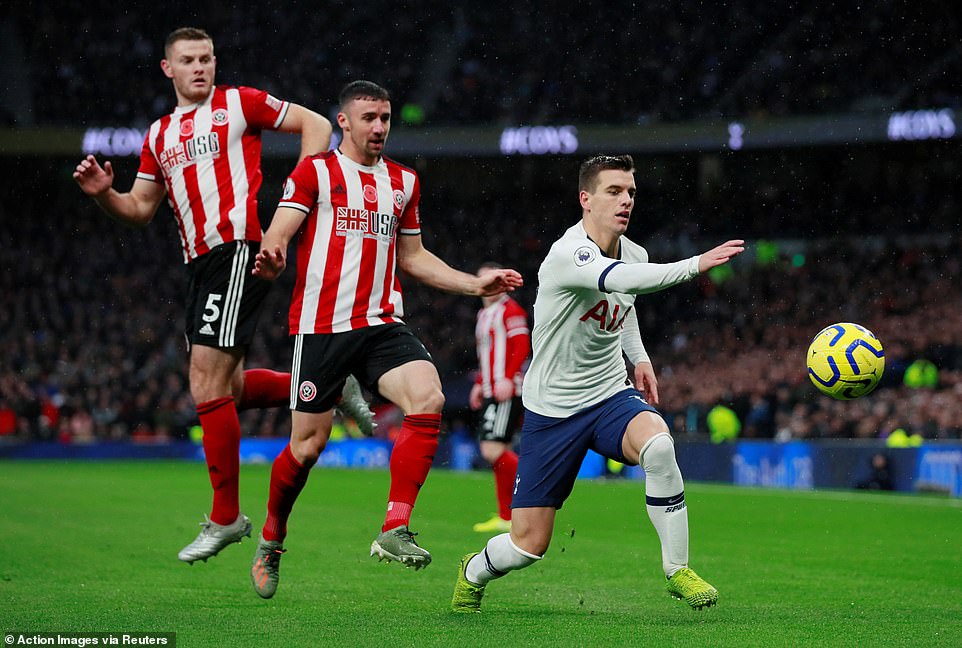 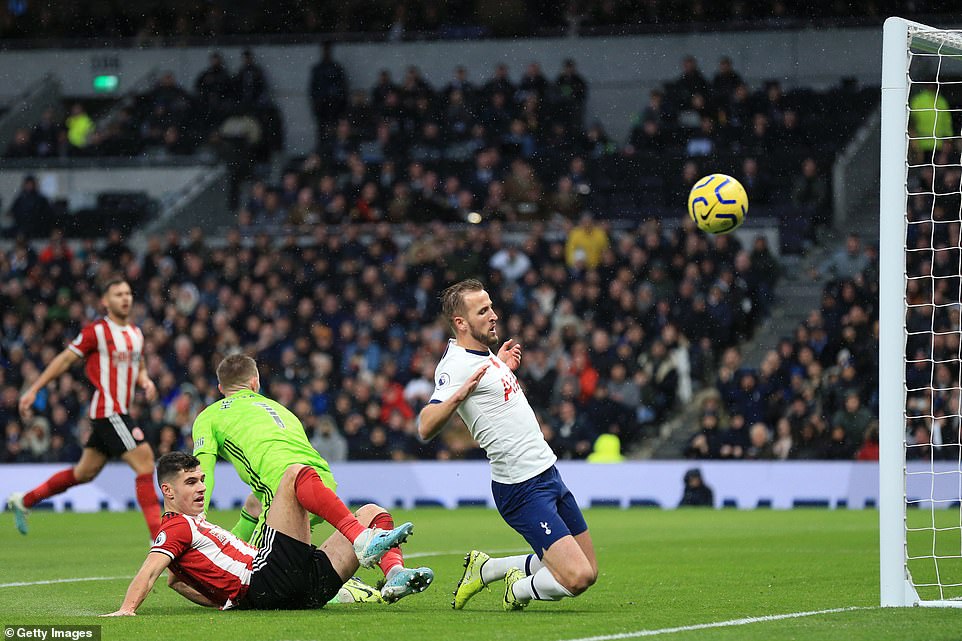 Spurs were on the back foot from the second minute when Eric Dier was booked and spent the rest of the game on a knife-edge against the pace and trickery of Lys Mousset.

Davinson Sanchez treated the ball like a hot potato, playmaker Giovani Lo Celso did little in his first Premier League start to suggest he’s the new Christian Eriksen – while Eriksen stayed on the bench – and Tanguy Ndombele was replaced at half-time. ‘He felt uncomfortable,’ said Pochettino without being able to confirm a groin problem or some other physical ailment.

Sheffield United, whose city has been badly affected by floods this week, had dominated the first half. The excellent Lundstram struck the post from the edge of the penalty area with Ben Davies blocking the rebound shot from Mousset. Gazzaniga had to save from Lundstram, John Fleck and McGoldrick.

Pochettino didn’t look happy and Harry Winks came on for the second half. There was a marginal improvement. Son had the team’s first shot on target after 54 minutes and scored with the second – though it resulted from a misunderstanding in the visitor’s defence.

Alli’s ball to Kane in the penalty area was over-hit and Enda Stevens, with his back to goal, took a touch towards John Egan that his team-mate wasn’t expecting. Son nipped in between them and planted a finish between Henderson’s legs.

Stevens responded to the error by setting up what he thought was the equaliser two minutes later.

His cross was converted by McGoldrick only for VAR to chalk it off for a fractional offside earlier in the move with Lundstram’s toe judged to have been ahead of Dier’s knee by millimeters, if that. 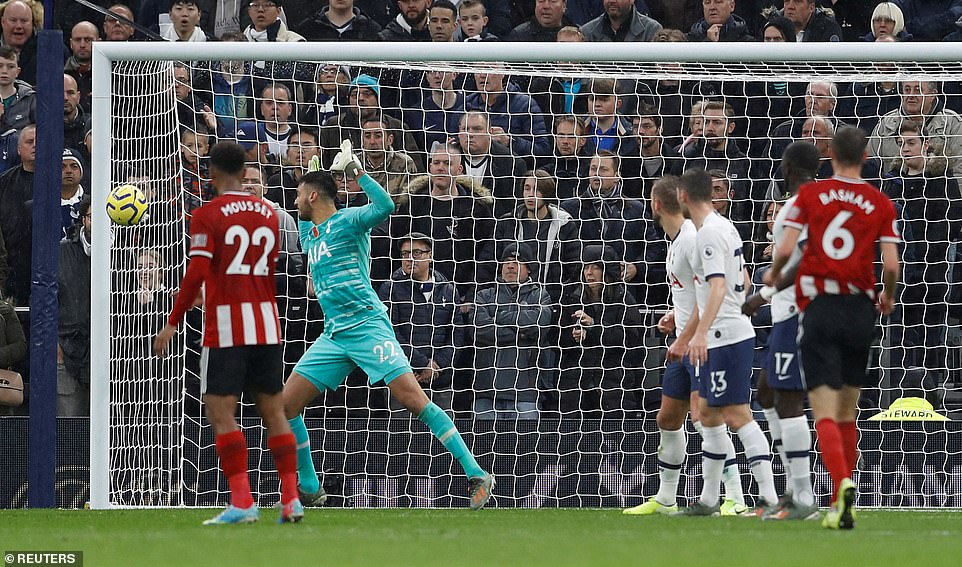 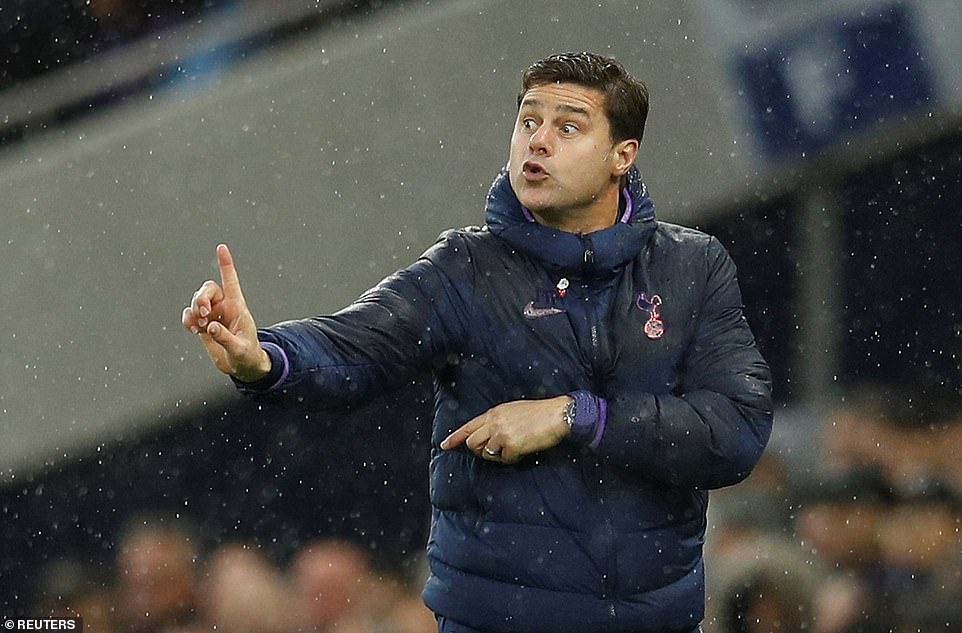 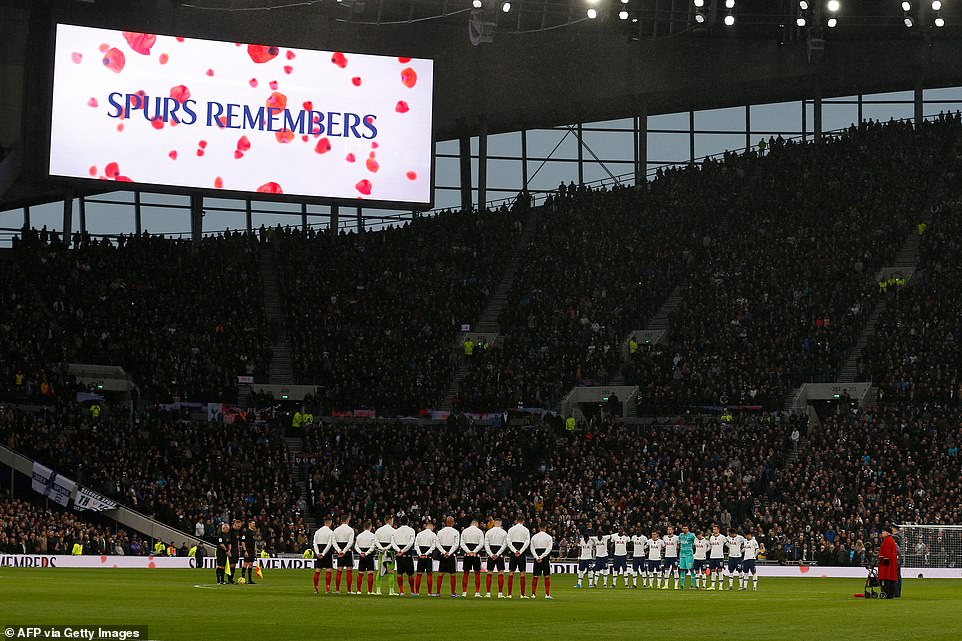 The comfort for Wilder is that his players didn’t let their heads drop at finding themselves still 1-0 down as they lined up to kick off. ‘Hugely pleasing,’ said the Blades boss.

It also helped that Spurs looked nervous holding onto the lead. Pochettino hooked Alli for Foyth and United found it easy to get forward.

McGoldrick released Baldock down the right touchline and his intended cross with the outside of his boot took a nick off Ben Davies, bypassed Dier and into the corner.

Incredibly, there was another VAR check to assess whether Basham in the penalty area was offside and had interfered with play, but the decision stood. Spurs had only one genuine chance to win the game late on – Dean Henderson tipping over from substitute Lucas Moura but even video technology couldn’t deny the Blades another successful away-day.