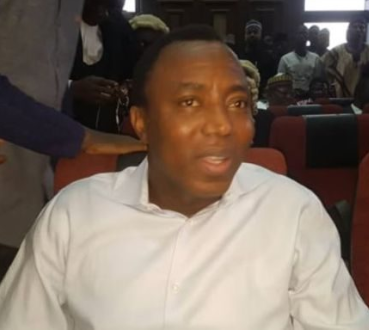 On Wednesday, November 13th, the Department of State Services, DSS, said it can only release the Convener of #RevevolutionNow protest, Omoyele Sowore to his sureties, which it said was the normal thing to do.

DSS’ spokesman, Peter Afunanya, in a statement said since no surety had shown up, Sowore would remain in custody of the department. He also said despite serial and unwarranted provocations, the service, as a professional and responsible organisation, did not shoot at the so called protesters and could not have done so.

“For emphasis, the service reiterates its avowed readiness to release Sowore once the processes are concluded. It maintains that the appropriate persons have still not turned up to take delivery of Sowore.

“While all those that have so far shown up are not directly concerned with the matter and therefore unqualified, many others have either chosen to grandstand or politicise it to achieve hidden interests,” he said.

According to Afunanya, in the last few days, the service had continued to witness deliberate campaigns of calumny, threats and aspersions against it, saying it would not, for any reason, join issues with its mudslingers, while calling on the media to be neutral and remain champions of the truth.

He added that “It is only appropriate that those who stood surety for Sowore present themselves and have him released to them. It is even more disappointing that Femi Falana, who is a senior lawyer, would wrongly guide his client and supporters.

“He is rather playing to the gallery and mobilising miscreants to subvert the service and other state authorities. He has excellent relationship with the DGSS. But in the circumstance, he has refused to reach out to him over the case like he had on previously related ones.”

He said for the avoidance of doubt, the service restated its commitment to the rule of law and particularly respect to the court and therefore called for calm, but stated that it would not be intimidated or harassed into hasty actions.

“It reassures the public that it will not waste a second to release Sowore if the proper processes are followed. And Falana, sure, knows what these are,” he said.