To help himself get over Sunday’s disappointing start at the ATP Finals Roger Federer spent part of his off day trying out the niche sport of Rackets across London at the Queen’s Club.

The 38 year-old Swiss, who has also played Real Tennis there in the past, is curious about different ways to wield a racket – and it looked like a change proved as a good as a rest.

On Tuesday he went out against world number eight Matteo Berrettini and kept his hopes of making the weekend semi-finals alive by beating the Italian 7-6(2), 6-3 in effectively a must-win match. 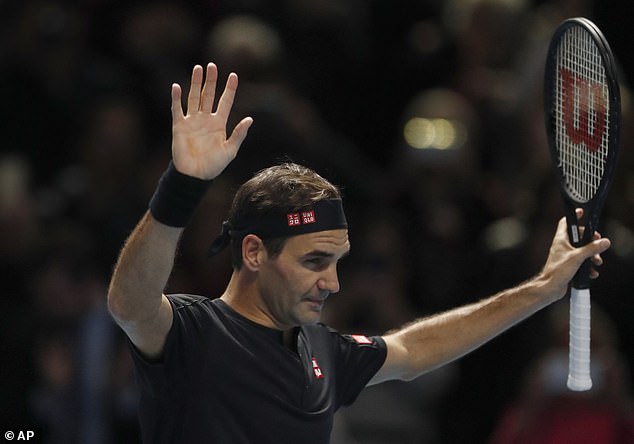 Roger Federer secured a 7-6(2), 6-3 victory against Matteo Berrettini at the ATP Finals

It is at this stage of the event that the mathematics can become infernally complex – a weakness of the format – but it sends him into Thursday’s match against Novak Djokovic in renewed good heart.

Djokovic was last night facing Federer’s conqueror of Sunday Dominic Thiem, and whatever the result it is most likely Federer would have to beat the Serb to have any chance of making the last four.

The Swiss said his day off had helped him: ‘There are plenty of ways to get rid of that loss, to hang out with my kids. We had a good time as a team.’

Britain’s Joe Salisbury and American partner Rajeev Ram find themselves in a similar position to Federer after recovering from their loss on the opening day to keep themselves in the hunt for a place on Saturday.

Needing a win to realistically keep themselves alive, the debutants came back to defeat Ivan Dodig and Filip Polasek 3-6, 6-3, 10-6 in the sudden death ‘champions’ tiebreak used in the doubles competition.

They are now most likely going to need a win on Thursday against second seeds Lukasz Kubot of Poland and Brazilian Marcelo Melo to sustain a home presence into the last couple of days. 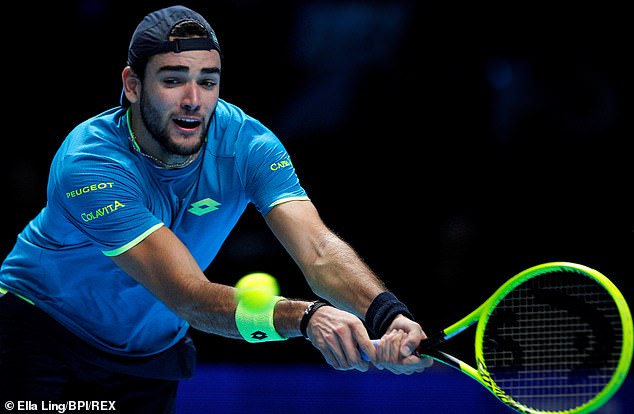 Berrettini was unable to cope with Federer, who ended up securing a straight-sets victory