Domestic and foreign flights intending to fly in and out of different states in Nigeria have been either cancelled or delayed due to poor visibility brought on by the harmattan.

The harmattan haze crippled the Nigerian Aviation sector, grounding foreign airlines throughout this week. Due to the foggy weather which has been deemed unsafe for aircraft takeoff or landing, scheduled services across all routes were delayed for several hours.

Cancellations have also affected flights from Qatar Airways, Emirates, Delta Airways and KLM. Virgin flights were, however, not affected due to advanced onboard technology.

The delay has affected most business travellers who were returning to Nigeria to take advantage of Valentine’s Day sales.

The most affected areas are reportedly Lagos, Abuja, Port Harcourt and Benin.

Guardian reports that all morning and afternoon-belt flights from airports in Lagos, and Abuja were delayed till evening on Wednesday, February 12. Kano and Kaduna flights were cancelled and rescheduled till the following day. At least, two European carriers were also diverted to Kotoka International Airport, Accra, Ghana, this week.

Companies like Air Peace and Arik took to Twitter to issue weather advisory to passengers as the foggy weather worsened on Wednesday, February 12, 2020. Air Peace’s Corporate Communications Executive, Stanley Olisa and Arik Air’s Public Relations and Communications Manager of Arik, Adebanji Ola both confirmed the delays and cancellation, stating that the actions were necessary for safety. 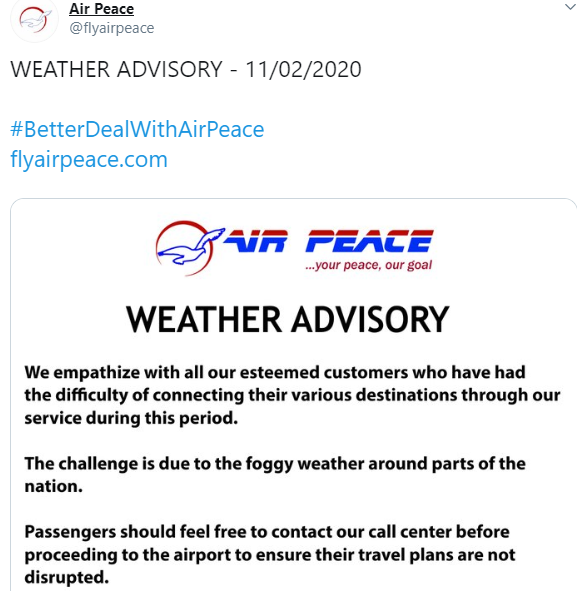 The development has been made worse by the absence of functional Instrument Landing Systems (ILSs) at the Murtala Muhammed Airport in Lagos State.

The concerned service provider, Nigerian Airspace Management Agency (NAMA), yesterday expressed concern over the diversions, while assuring those affected that the Instrument Landing Systems (ILSs) would soon be optimised.

Recall that back in January 2020, when flights were diverted to Accra, Ghana, due to low visibility brought on by the harmattan, a senior foreign airline official told ThisDay: “The problem we are facing is caused not by weather but by the bad decisions made by government officials. There is Category 3 ILS in Lagos but it is not functional because it has not been calibrated and because it is not functional, some airlines did not want to risk landing in low visibility in the evening and night. So, they divert their flights to Accra. ASECNA used to do the calibration for NAMA but the Minister acquired $8.5 million aircraft recently for calibration but it is not working. So, some airlines said they cannot take the risk and decide not to land at the Lagos airport.”

Back in November, 2019, the Nigerian Airspace Management Agency (NAMA) installed Category 3 ILS at the Lagos airport so that flights could land at lower visibility, but the equipment was not calibrated. Without calibration, its efficiency cannot be ascertained.

The Minister of Aviation, Senator Hadi Sirika acquired $8.5 million aircraft for calibration but the aircraft has not been put to use since it was acquired last year, ThisDay reports.

The publication added that NAMA had in the past engaged the services of ASECNA, a sub-regional aeronautical agency in charge of the management of the airspace of French-speaking West African countries, but the engagement stopped when the Minister acquired the calibration aircraft.

Though the Category 3 ILS has been installed, it is not in use and the existing Category 2 ILS had been removed and replaced.