" > Nicole Scherzinger, 41, reveals she had to get used to the Pussycat Dolls' sexy image - Pearl TV official site

Nicole Scherzinger has revealed her ‘strong religious beliefs’ made her uncomfortable with the Pussycat Dolls’ sexy image when she first joined the band in 2003.

The PCD lead singer, 41, told The Guardian she ‘just wanted to make [her] mother proud’ when she joined the burlesque-turned-pop group in 2003, aged 25.

But when the other auditionees turned up in their underwear it was ‘a massive hump’ the devout Christian and granddaughter of a Catholic bishop had to try to get over. 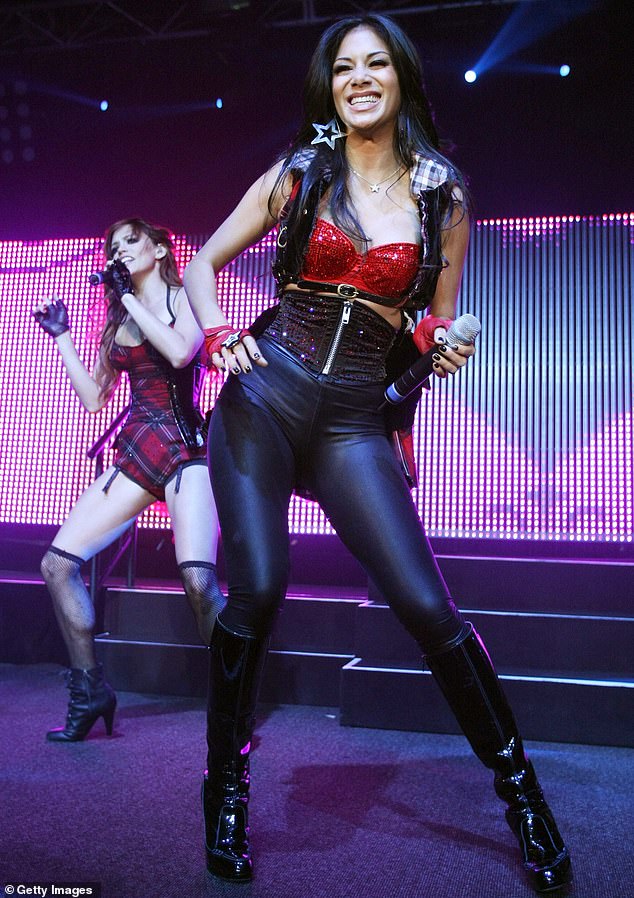 Modest: Nicole Scherzinger has revealed her ‘strong religious beliefs’ made her uncomfortable with the Pussycat Dolls’ sexy image when she first joined the band in 2003 (pictured 2008)

‘If you look at my outfits, I was in trousers most of the time,’ she said.

The X Factor judge revealed despite the band’s sexually charged  image, she liked to try to be ‘classy’ and leave ‘a little bit for the imagination’ during her early years in the chart-topping group.

Nicole, who is reuniting with bandmates Carmit Bachar, Kimberley Wyatt, Ashley Roberts and Jessica Sutta for a reunion tour said: ‘I’m a massive fan of all the cool kids out there, I’m not going to judge them.

‘I just know, for myself, I like to try to be a little bit more … I don’t want to say demure, I sound like a prude – classy?’ 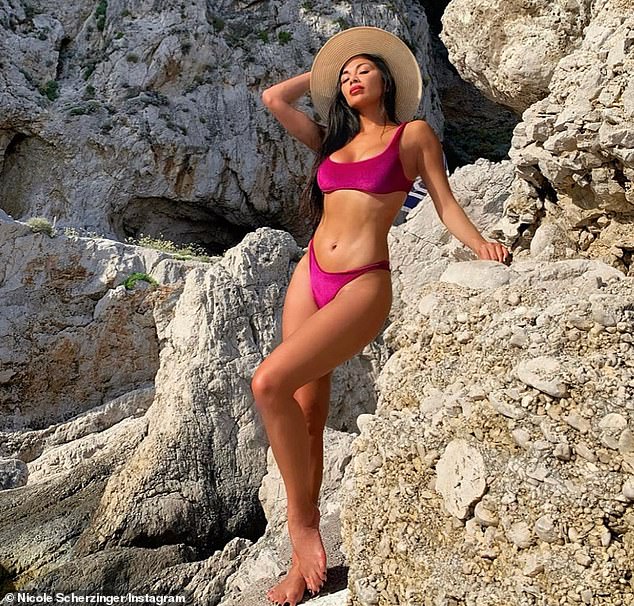 Comfortable: When the other auditionees turned up in their underwear it was ‘a massive hump’ Nicole had to try to get over, she admitted to The Guardian [pictured in Italy earlier this year] 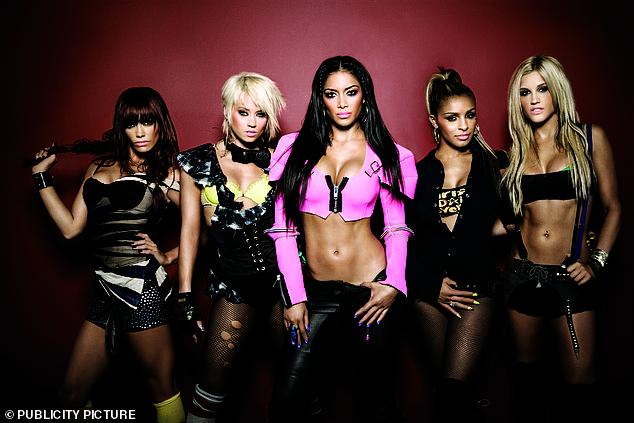 Sexy image: The X Factor judge revealed she liked to try to be ‘classy’ and leave ‘a little bit for the imagination’ during her early years in the chart-topping band (pictured 2009) 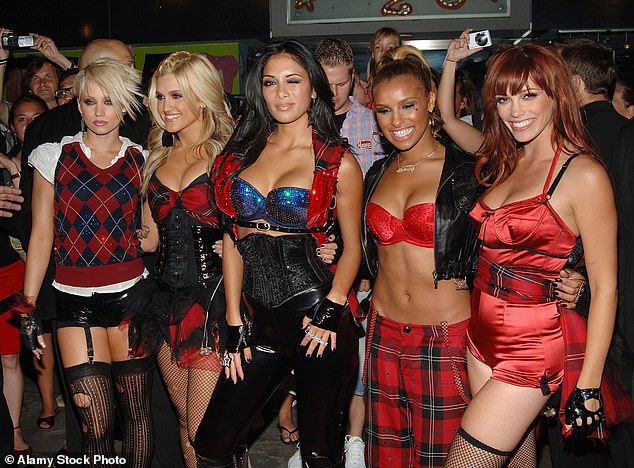 Covered up: ‘If you look at my outfits, I was in trousers most of the time,’ she said (pictured 2009)

Nicole recently opened up about being in ‘a very dark place’ during her time with the Pussycat Dolls during her battle with bulimia.

After addressing the illness throughout her 30s Nicole has posted a number of body confidence images on Instagram.

Next to images displaying her svelte frame in a pink bikini while on holiday in Italy earlier this year she penned: ‘I have struggled with my weight and image my whole life and I still do, but I’m just realizing as the moons go by to take it easier on myself.

Goddess: After addressing her bulimia throughout her 30s Nicole has become happier with her body, and often wears more revealing dresses [left in 2012, right in 2013]

‘I realized I’m too grown up and need to not to be so hard on myself, I have to choose to embrace me and my body through all of its stages and seasons!

‘This season I’m grateful for the body I’ve worked so hard for in the gym. Now I am rewarding myself by eating my weight in pasta here in one of my favorite places. Italy!’

Next year Nicole, Ashley Roberts, 38, Carmit Bachar, 45, Kimberly Wyatt, 37, and Jessica Sutta, 37, will be reuniting for their first tour since the split. 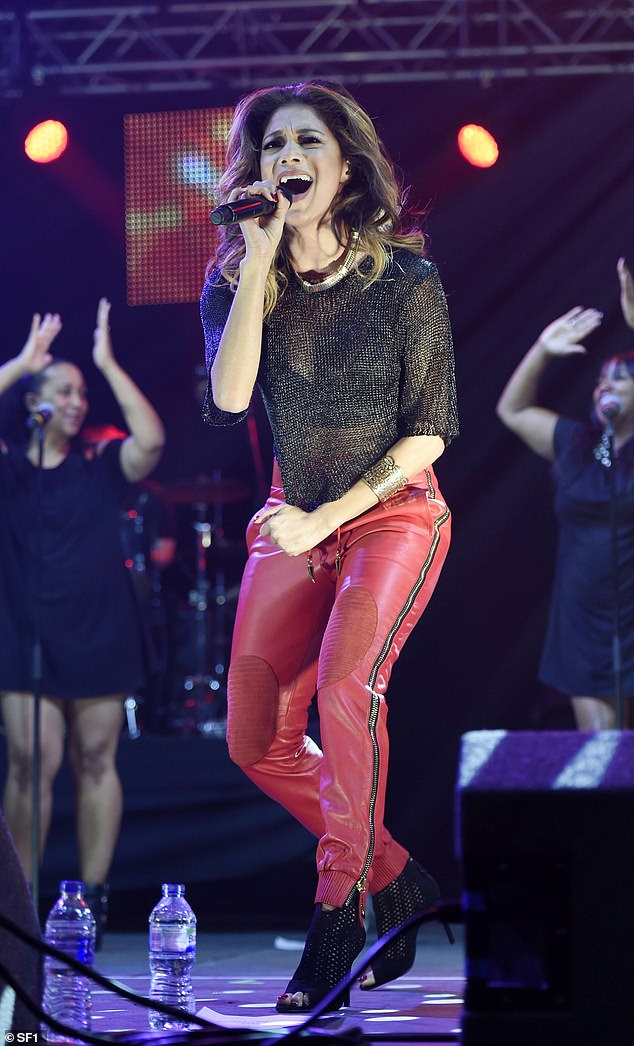 Star: Nicole recently opened up about being in ‘a very dark place’ during her time with the Pussycat Dolls during her battle with bulimia [pictured in Manchester in 2014]

They are expected to perform together during The X Factor: Celebrity’s live final on Saturday but Melody Thornton won’t be joining them.

Earlier this year, Melody candidly revealed she struggled during her time in the Pussycat Dolls because she wasn’t able to showcase her singing voice.

The Dancing On Ice star said she found the focus being on Nicole, who recorded all the vocals for the band, challenging. 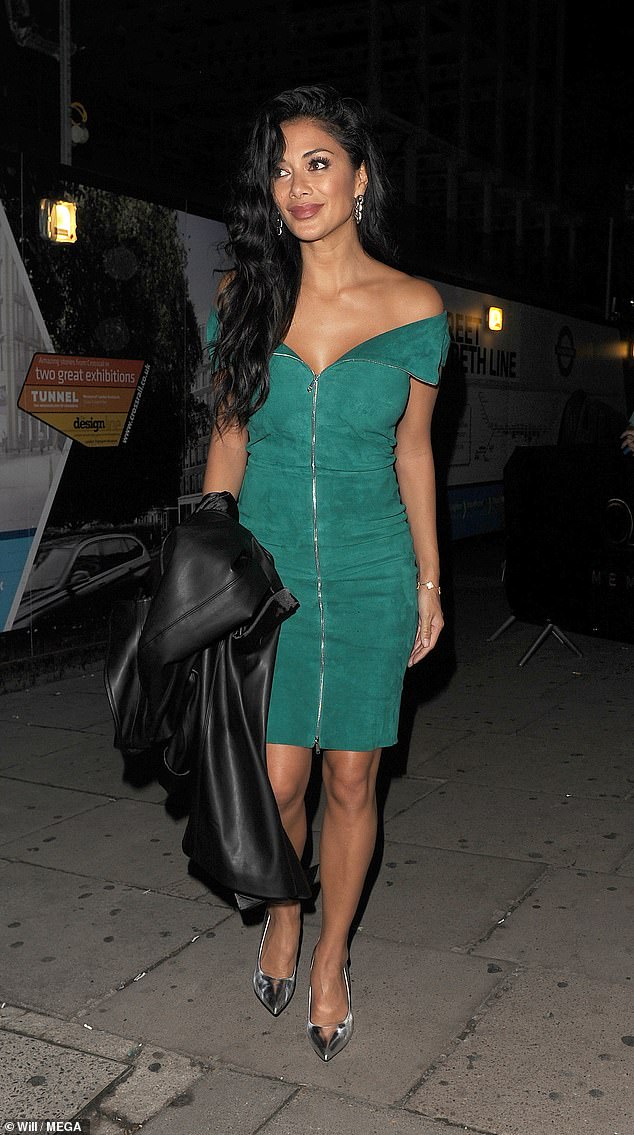 ‘Nicole had been in two groups prior, she had a lot of experience. We were told, Nicole is going to do all of the recording,’ she revealed.

The American girl band was founded in Los Angeles by choreographer Robin Antin in 1995.

They were originally a burlesque troupe but became a chart-topping pop group in 2003 with hits Don’t Cha, Stickwitu and Buttons.

Nicole joined the Pussycat Dolls – who sold more than 54 million records between 2003-2010 – as the lead singer, before leaving in 2009 to become a solo artist.

Tickets for the Pussycat Dolls’ reunion tour go on sale on Sunday December 1.

For confidential support call the Samaritans in the UK on 08457 90 90 90, visit a local Samaritans branch or click here for details.

How Nicole’s ‘conservative’ image evolved in the Pussycat Dolls

Nicole Scherzinger, 41, said she had to get over her ‘conservative’ religious beliefs when she joined The Pussycat Dolls in 2003.

‘If you look at my outfits, I was in trousers most of the time,’ she told The Guardian. 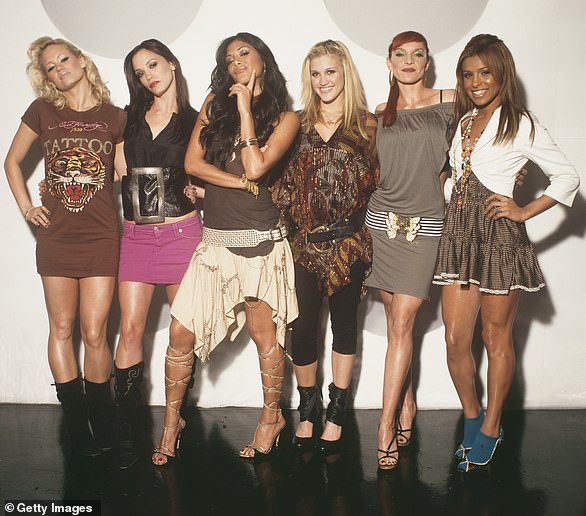 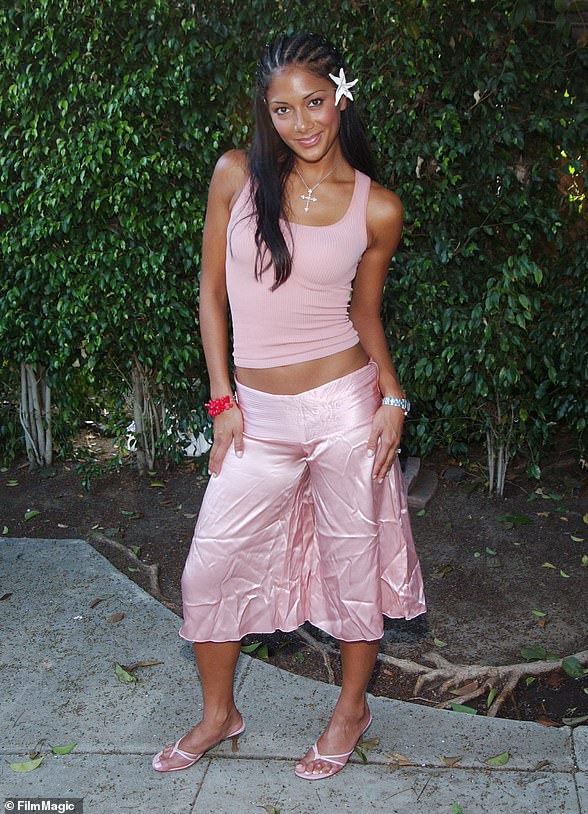 Midi-skirt: Nicole was pictured in this pink ensemble in September 2004 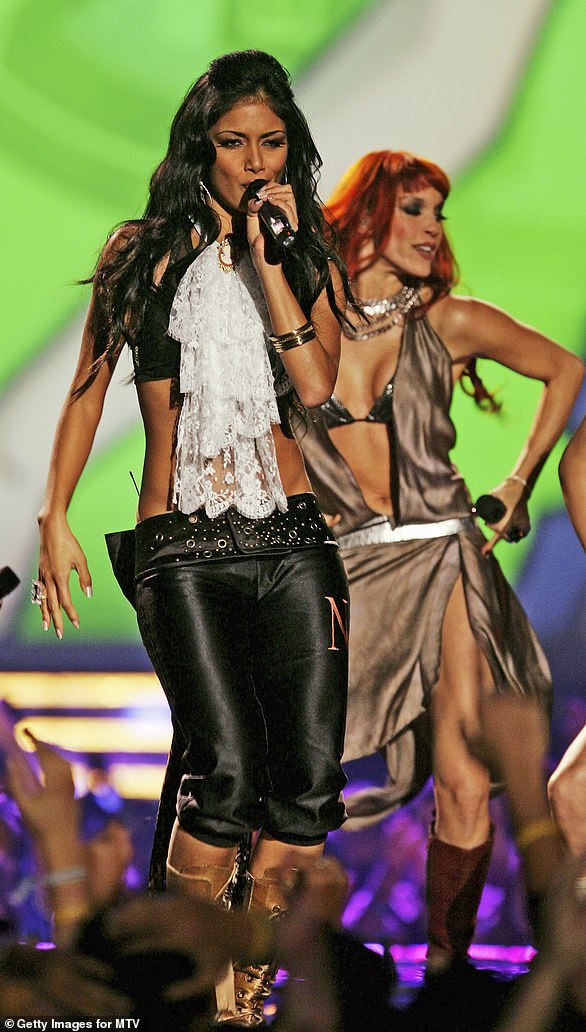 Cropped trousers: Nicole’s outfits were racy, but she covered up with a pair of cropped trousers during the MTV Europe Music Awards at the Atlantic Pavilion 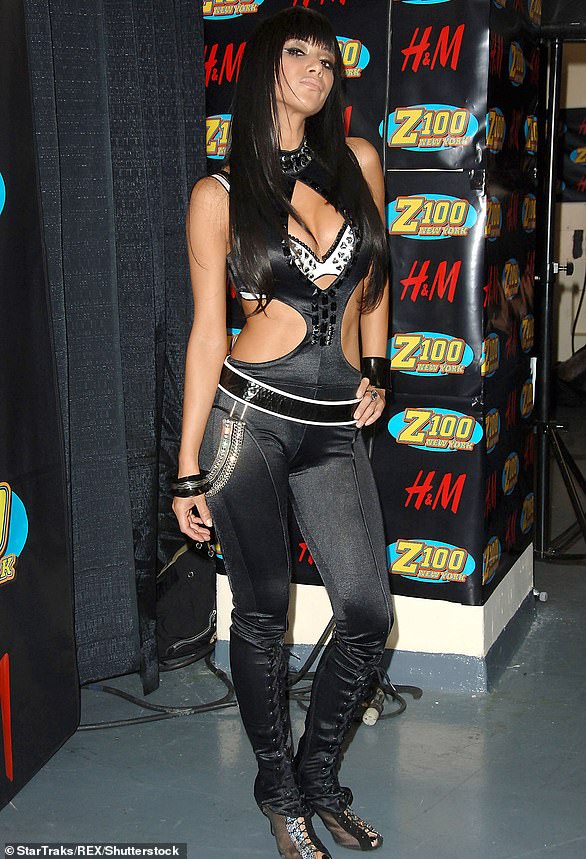 Covered up: The star layered lace-up leg warmers over a pair of trousers in an effort to ‘leave a little to the imagination’ at the Jingle Ball in Madison Square Garden, New York 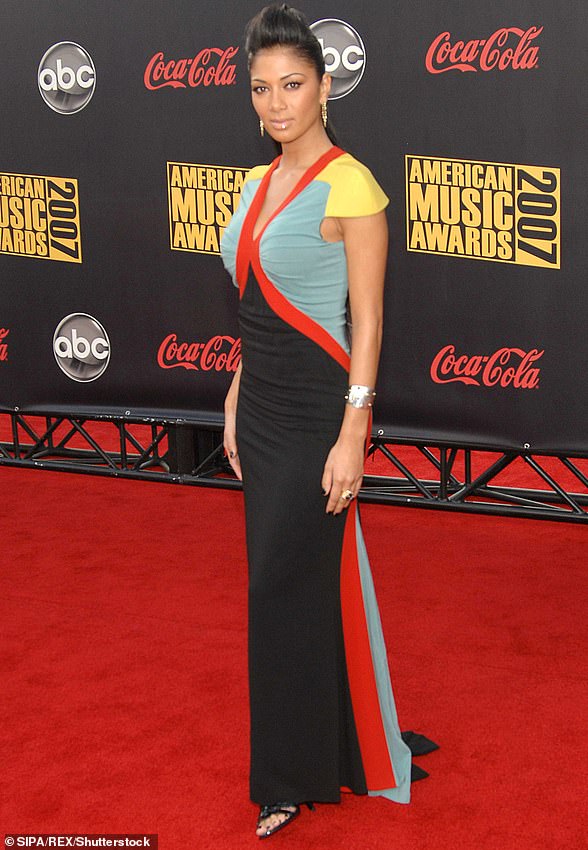 ‘Classy’: In November 2007 Nicole wore a figure-hugging gown to the American Music Awards in Los Angeles 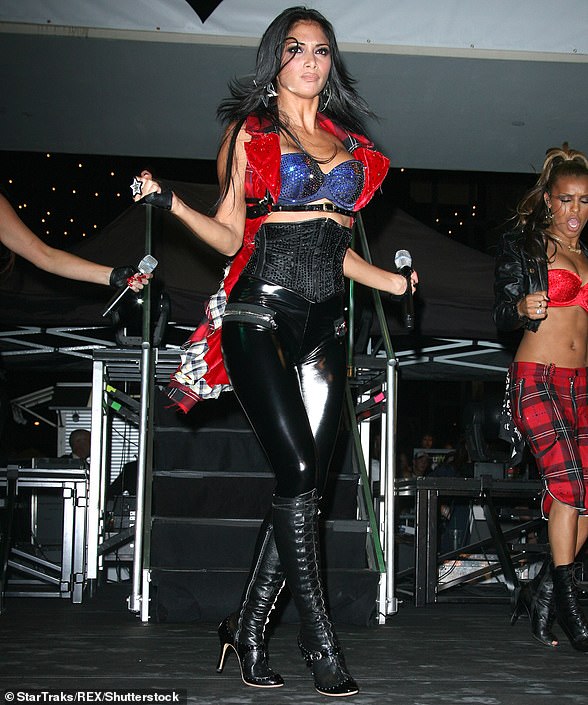 Height of fame: A year before Nicole left the band she was still covering up with a corset and jacket over her outfits at the Doll Domination CD release 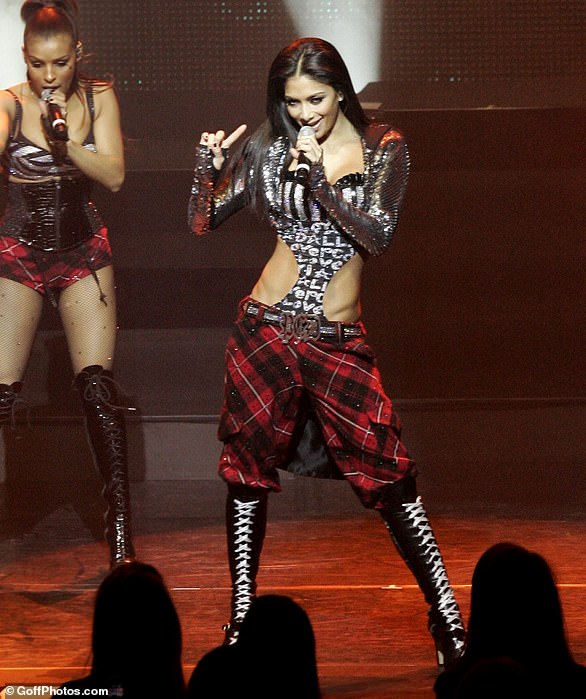 Showstopping figure: Nicole was still wearing baggy trousers, even as she showed off her svelte frame in a skimpy top at the Grimaldi Forum in Monaco