Shantel Carrillo, 30, from Santee, took to social media to share a photo of her 20-week ultrasound and friends were quick to notice something unusual.

They claimed the ultrasound looks like there is someone kissing the baby in the womb.

Shantel told NBC San Diego: “Right when I posted it, like 30 seconds later, someone was like, ‘There’s an angel kissing your baby’. ”

The ultrasound shows a figure in the top left corner which Shantel believes resembles her father. Shantel believes her late father, Chuck, who passed away in 2016, can be seen kissing her daughter in the womb. 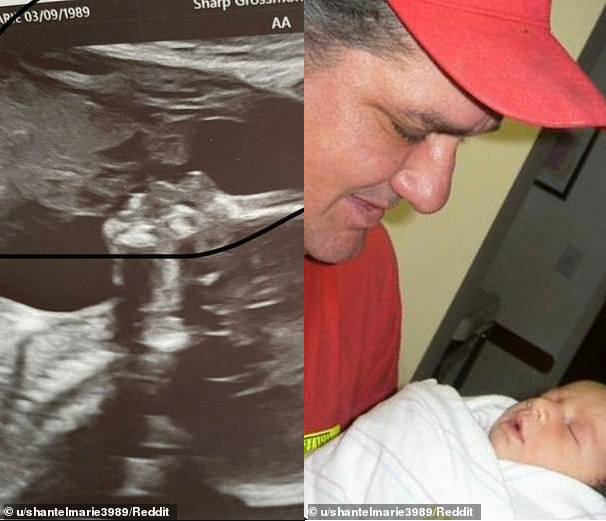 She told ABC10: “It has his nose, his little chubby cheeks, his little double chin, and my dad wore a hat like all the time. It looks like the bill of his hat and his lips are just touching hers so perfectly.”

The scan was posted alongside a picture of her father holding her first daughter Myree. And Shantel said her father would be “over the moon” to be now be part of her second daughter’s life.

She added that it could be that her placenta looks like her father, however, she is overjoyed at the special picture.

Her daughter is due in April which is also the same month her father was born.