" > Married nursery worker, 20, who had sex with a 13-year-old boy and had his baby, exposed | Pearl TV official site

A married nursery worker had sex with a 13-year-old boy and had his baby, a jury heard today.20-year-old Leah Cordice from Windsor, who was studying child care while working at the local nursery drunkenly walked into the boy’s bedroom where he was playing computer games and pulled down his trousers before having sex with him, the court heard.

It was also claimed that she continued having unprotected intercourse with the child twice a month for a year, even while she was pregnant and after she gave birth to a girl. Her husband believed the child was his but a later DNA test showed that the schoolboy was actually the father, Reading Crown Court heard.

Prosecutors told how the boy, who cannot be identified for legal reasons, had later said to police in interview: ‘You are supposed to have sex and, like, love each other. It was just like, she just wanted to do it. Now I feel like she did not really care about me.’ The jury also heard how the woman went to the boy’s house drunk in January 2017 and pulled his trousers down while he was playing computer games. She was 17 at that time. Prosecutor Grace Ong said: ‘This case concerns the defendant having a sexual relationship with a child. 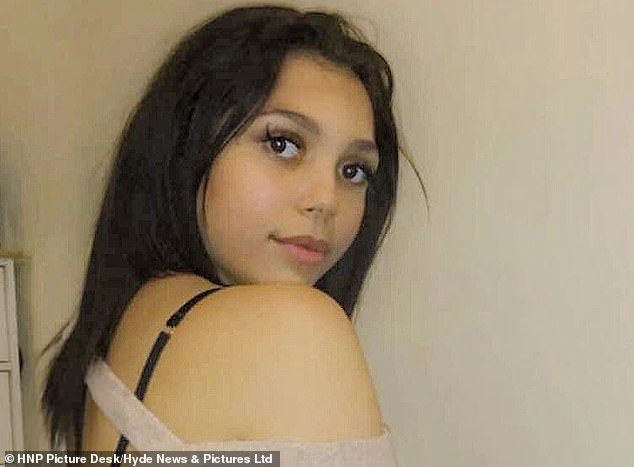 ‘Matters only came to the attention of the local authority, the Royal Borough of Windsor and Maidenhead Council, in the course of family proceedings in relation to Ms Cordice’s child.’DNA testing revealed that her child is the complainant’s biological daughter.’Cordice and the boy continued having unprotected sex roughly twice a month until the start of 2018, the court heard, a few weeks before the boy, who had turned 14, was interviewed by police.Ms Ong, speaking of the police interview, told the jury: ‘The boy said that he and Ms Cordice started having sexual intercourse when he was 13 years old.

‘The defendant, Ms Cordice, was drunk, she went around to his address, she went into his bedroom and at first, they talked normally and he continued playing on his Xbox and watching YouTube. ‘Ms Cordice then sat on his bed and started to hug him and kiss him and it carried on. ‘He said, “I could not really say no. She would have kept asking and asking me to have sex”. Afterwards, he felt that it was a bit weird and that she did not say anything to him afterwards.’The court also heard that the boy was the first person Cordice told that she was pregnant. The mother of one also showed him an app on her phone which disclosed the date she had conceived was the first time they had had sex. Even after Cordice got married to her long-term partner, she continued having sex with the boy.

In a police interview video shown to the jury, the boy told how Cordice’s husband had found out about her relationship with him.The boy told investigators: ‘Her boyfriend found out. He did not really say anything. He got angry at first. He started shouting at me. Then he did not really say anything to me. ‘She spoke about him to me sometimes, just how he had been annoying her, accusing her of stuff.On July 9, 2018, Police arrested Cordice at her home in Windsor, Berkshire. The jury heard she had provided a prepared statement, saying: ‘I deny any sexual contact with the complainant.’He has always had a crush on me and would always make inappropriate remarks and do inappropriate things such as grab me and annoy me.

We did not have sexual contact.’Despite DNA evidence to the contrary, she insisted: ‘The complainant is not the father of my child.’However, Ms. Ong said: ‘It may come as a surprise to you that she, Ms Cordice, now accepts that there was sexual activity between her and the boy.

‘What she may say is that she was raped by the boy. The prosecution’s case is that there was no such thing but these individuals agreed to have sexual intercourse with one another.’The prosecution’s case is that this claim of rape is a lie, it is an attempt to make the complainant go down in your estimation of him.’Her assertion that she still believes that the boy is not her child’s father, the prosecution will say, is patently untrue.’The defendant still denied that the boy was the father of her child, the jury heard.Cordice, who is charged with five counts of having sexual activity with a minor, three which were said to have taken place while she was aged 17 years and two while she was 18 years old, denied all the charges. The trial continues.