Liverpool have all the momentum but the two-time champions aren’t downing tools nine points behind. This was their second comeback win at The Etihad in a row and they’ll surely be stronger in the second half of the season when Leroy Sane and Aymeric Laporte return from long-term injuries.

Chelsea gave them a tremendous game and even won the possession count – City’s 46.74% was the lowest ever posted by a Pep Guardiola team – but Mahrez ultimately proved the difference. 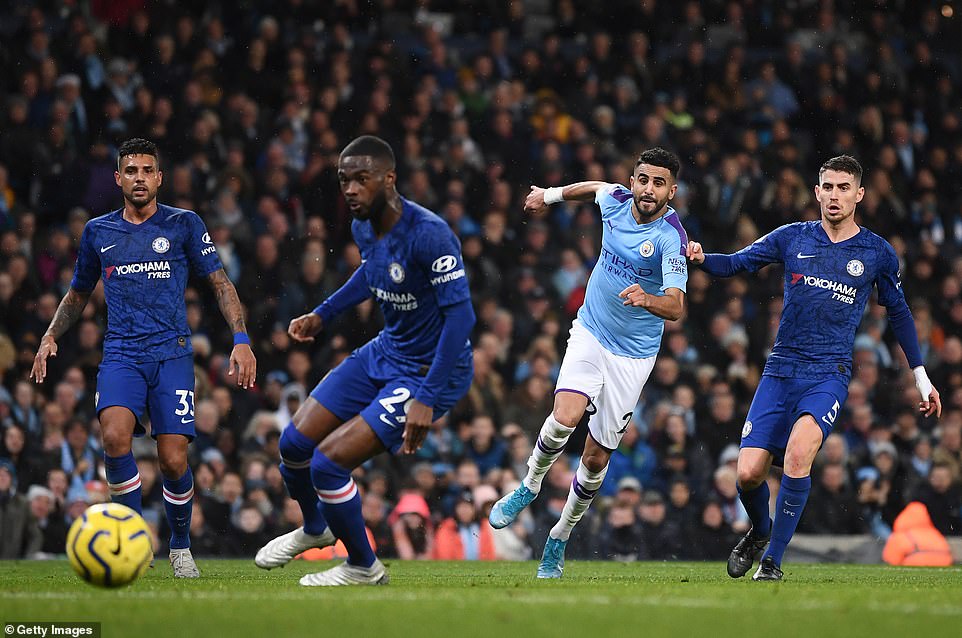 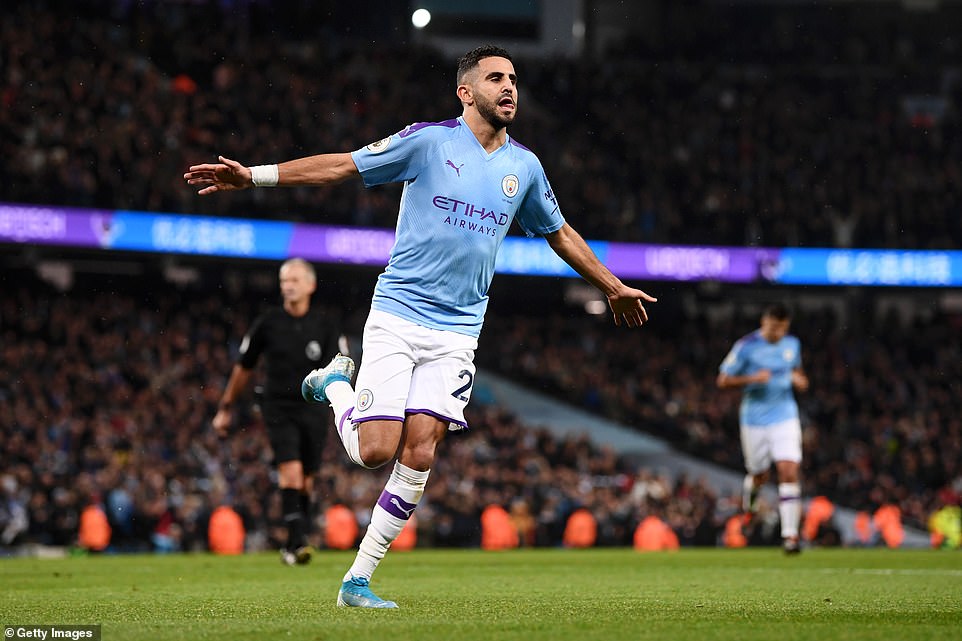 Receiving the ball from Rodri’s pass just outside the right edge of the penalty area, the Algerian showed real intent to accelerate into the box, cut inside Emerson’s challenge and rifle a finish between the legs of Fikayo Tomori just inside Kepa’s right-hand post.

It was Mahrez’s first goal since September, partly because he usually has to sit on the bench when Bernardo is available, but the strength in depth available to Guardiola is the envy of every other Premier League manager.

‘Chelsea have a fantastic team. We suffered and scored our equaliser when they were better and we improved in the second half,’ said Guardiola. ‘It was a fantastic goal from Riyad and he fought a lot but he can do better.’

On losing the possession statistic, Guardiola quipped: ‘There is always one thing in your lifetime that hasn’t happened. It happened. So, OK, I have another record now, I won one game without possession. They are incredible team with Kante, Kovacic, Jorginho.’

City had brooded for two weeks over their defeat at Anfield before the international break. They welcomed Ederson back between the sticks and started brightly with Kevin De Bruyne pulling strings and a whisker away from shooting his side ahead. 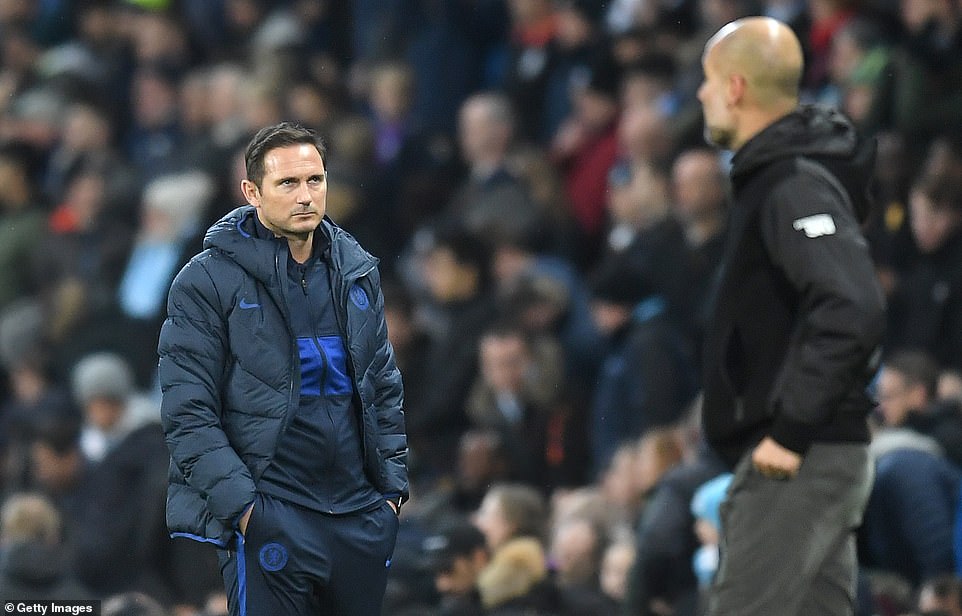 But Chelsea are a formidable outfit under their club legend Frank Lampard, whose playing career also included a season at The Etihad.

The visitors patiently soaked up the early pressure and had the counter-attacking ability to trouble City’s suspect defence.

Willian, Tammy Abraham and Tomori all missed the target after Chelsea’s speed had opened up Guardiola’s defence and they deserved to take the lead after 21 minutes.

Mateo Kovacic pinged a brilliant pass to pick out Kante’s run towards the penalty area. The French World Cup winner outpaced international team-mate Benjamin Mendy, took one touch to control and a second with his left foot to dink past Ederson.

It was an outstanding goal that underlined Kante’s credentials as more than a tackler. If football fans chose their World XIs, he and Virgil van Dijk would be the two Premier League names with unanimous support. 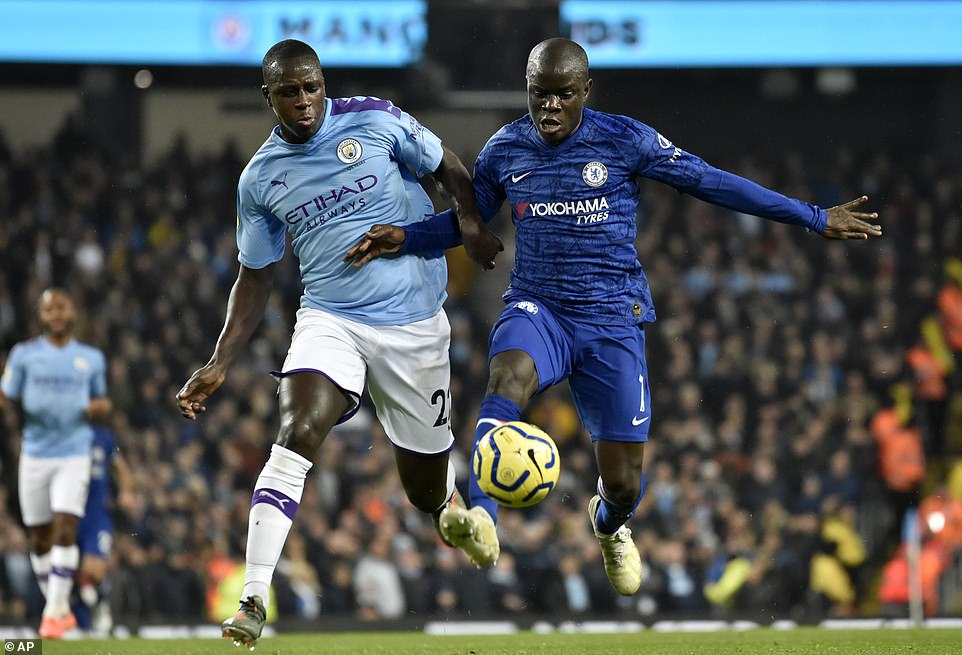 N’Golo Kante surged into the box, evading the heavy pressure of Benjamin Mendy, and managed to squeeze a shot away 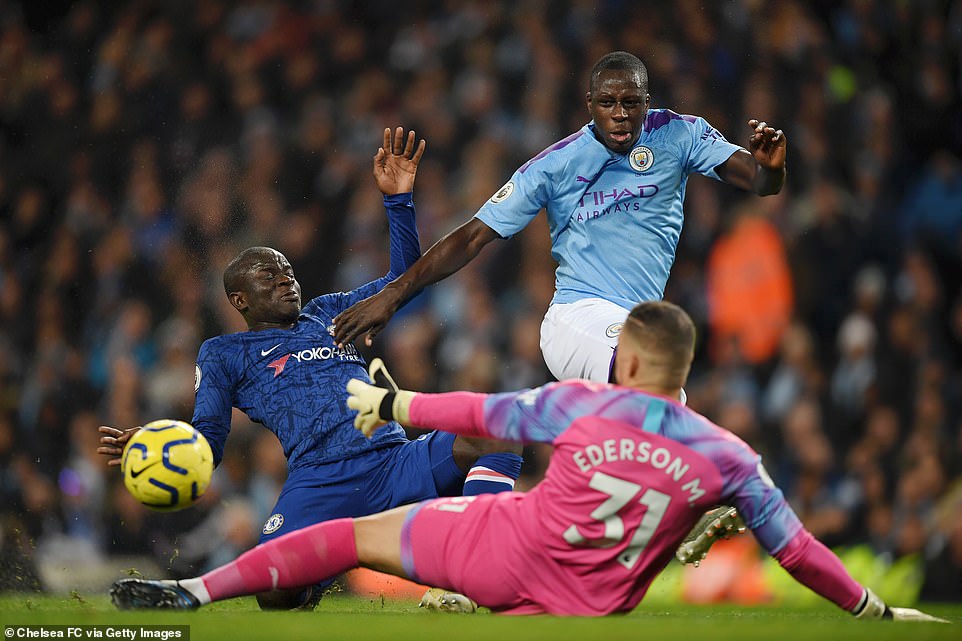 Kante fell to the floor as he stretched his left-foot to the ball, and it squirmed past Ederson and trickled into the net 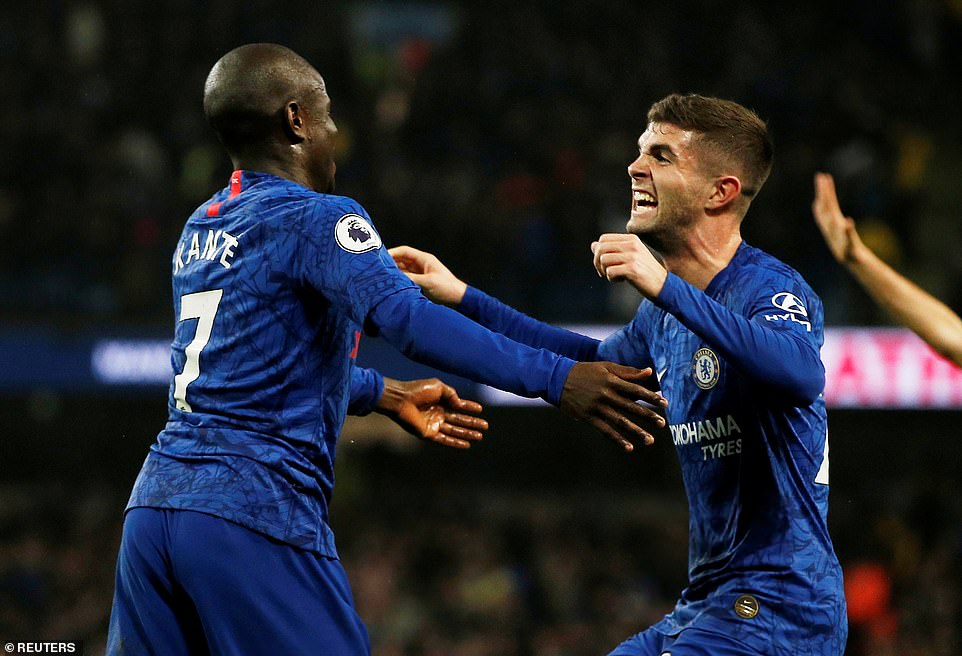 Kante celebrates the opening goal of the game with team-mate Christian Pulisic, but Chelsea couldn’t hold onto their lead

The tempo of the game was outstanding given the disappointment both clubs must have felt watching Liverpool’s late winner at Crystal Palace earlier in the day. Even Guardiola was out-hopped by Lampard in the technical area.

City were under the cosh and needed one of their big players to step up. De Bruyne duly did so after 29 minutes.

David Silva’s pass reached the Belgian on the edge of the box via a couple of deflections and from there, the Belgian was composure itself.

He cut inside and fired home from 18 yards with a final little nick off Kurt Zouma depriving Kepa of any chance to save. 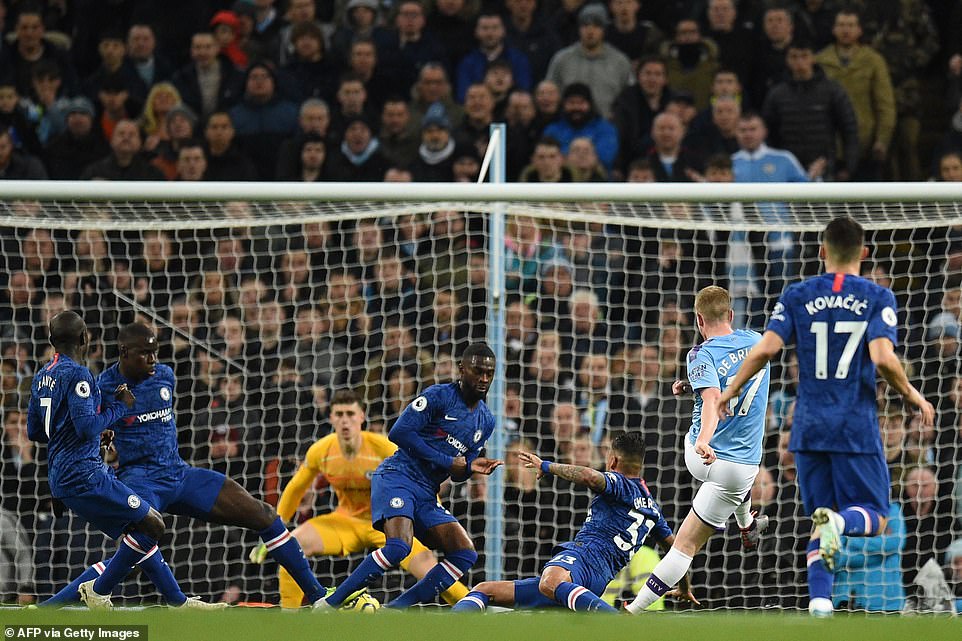 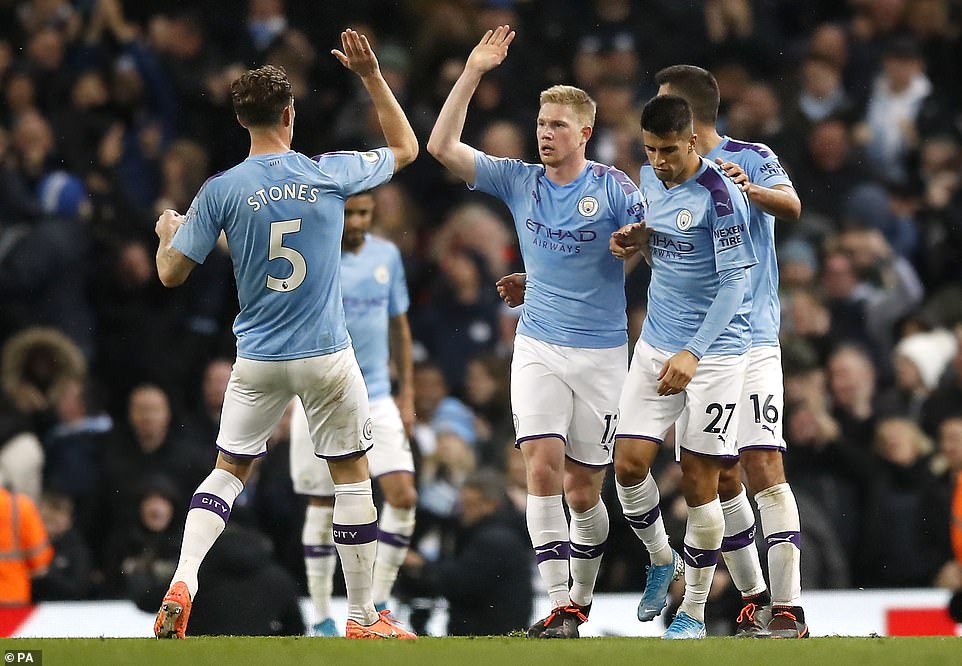 The turnaround was completed eight minutes later with Mahrez’s great strike. It proved the real turning point of the game.

Once ahead, the confidence came flooding back for City. Aguero hit the post after Kepa had inexplicably kicked the ball out to him and Mahrez was left holding his head in disbelief after Kepa denied him a second goal with a wonderful fingertip save.

City’s win sees them leapfrog Chelsea into third place but the Londoners made them scrap.

Fernandinho diverted a shot from Kante wide and Lampard became even more adventurous by hooking left-back Emerson for Reece James.

‘I judge manager by their courage,’ said an admiring Guardiola of his rival. 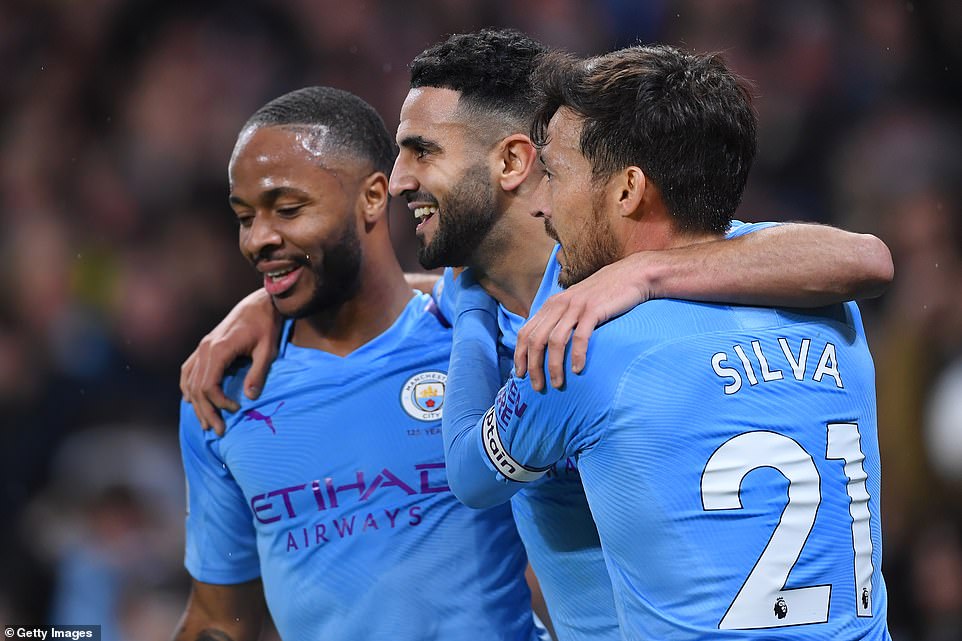 The only downside for City was having to make three changes.

Rodri, who has had injury problems, departed after 51 minutes, tired. David Silva got cramp and, most significantly, Sergio Aguero went off 14 minutes from the end.

‘We think it’s muscular,’ said Guardiola who could miss his striker for three weeks if scans confirm that on Monday.

Raheem Sterling had a goal to make it 3-1 chalked off by VAR in injury-time for offside but that would have given the scoreline a very harsh look given Chelsea’s performance. 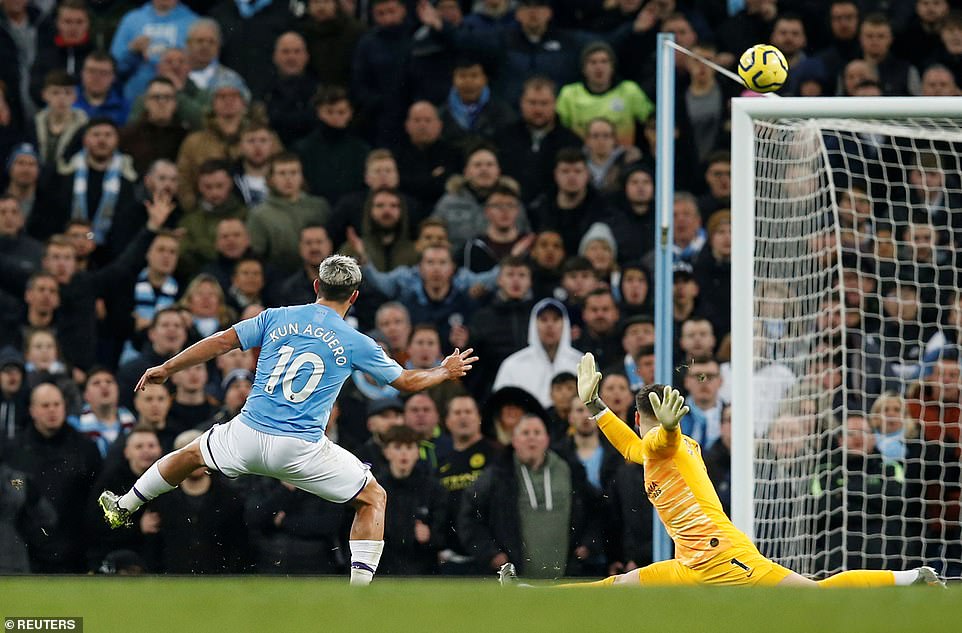 ‘I wanted to come here and be brave on and off the ball,’ said Lampard ‘In the first half, you saw all of that.

‘We were playing well and throughout the game, there were positives. It just shows that maybe the finer details in both boxes decides these games. You can’t say anything other than there were two really strong teams out there.

‘Their first goal was deflected and the second was a real moment of quality from Mahrez.’ 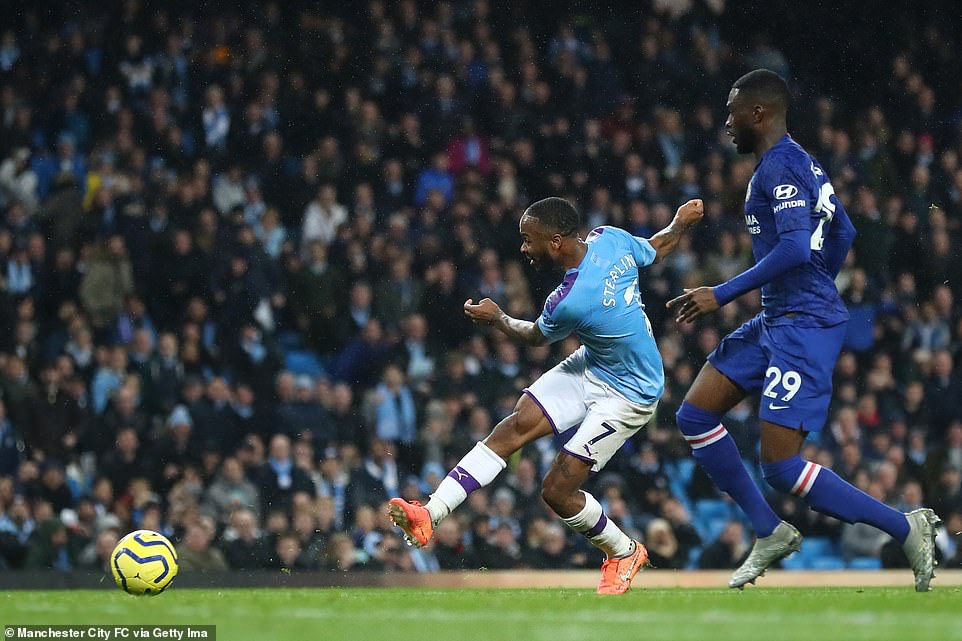 Raheem Sterling thought he had made sure of all three points with a goal in stoppage time, but VAR had the final say 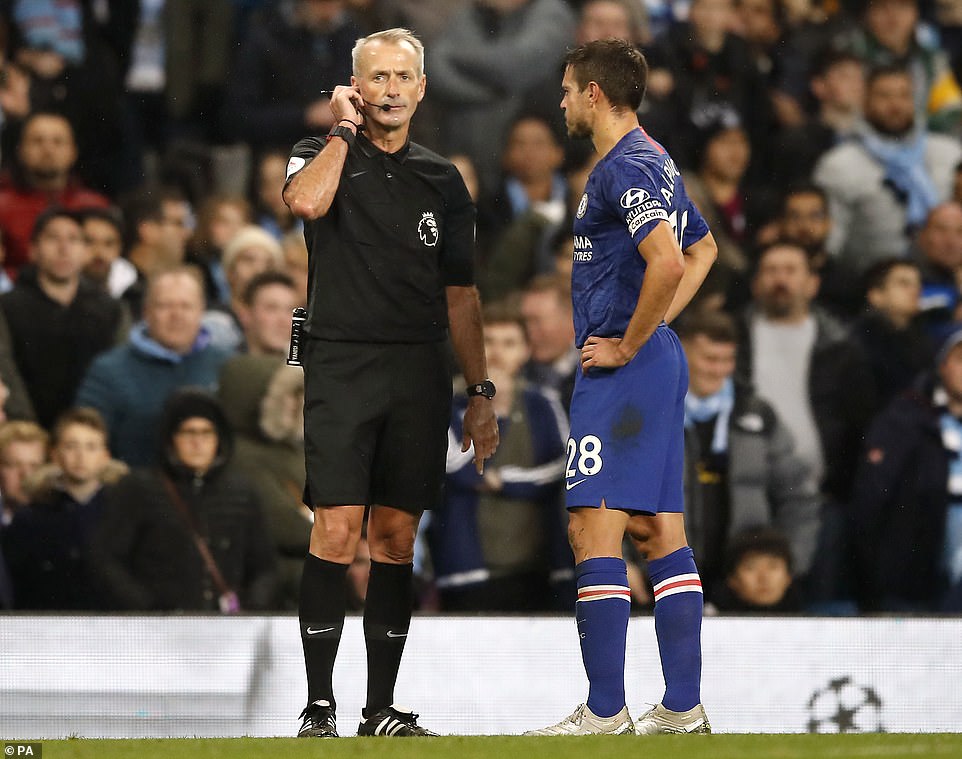