" > Man who used a blade to cut a lady's bag to steal her phone, arrested in Lagos - Pearl TV official site

The Rapid Response Squad of the Lagos State Police Command has paraded a suspect who used a blade in cutting open the bag of a lady going about her daily business in Oshodi area of the state.

He was arrested after given a hot chase by residents of the area and RRS operatives following an alarm his victim raised. The suspect has been handed to Akinpelu division of the Nigerian police for prosecution.

The RRS tweeted “Somewhere in Oshodi, under this hot sun, this man, Okon Edet used a blade to cut the bag of a lady going about her business. She raised alarm and he was chased by our officers and people around. He has been handed over to Akinpelu division for prosecution.” 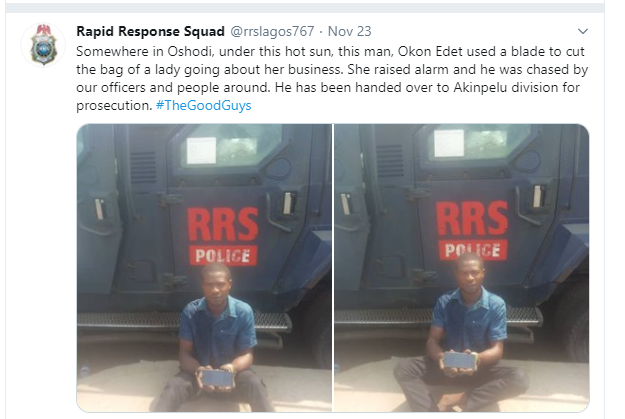