She’s known for her unique sense of style.

And Kristen Stewart showed off her edgy side in a black suit and unbuttoned white shirt as she attended the American Cinematheque Award gala in LA on Friday.

The Charlie’s Angels actress, 29, could not contain her smiles as she raved about honoree Charlize Theron during her speech at the event. 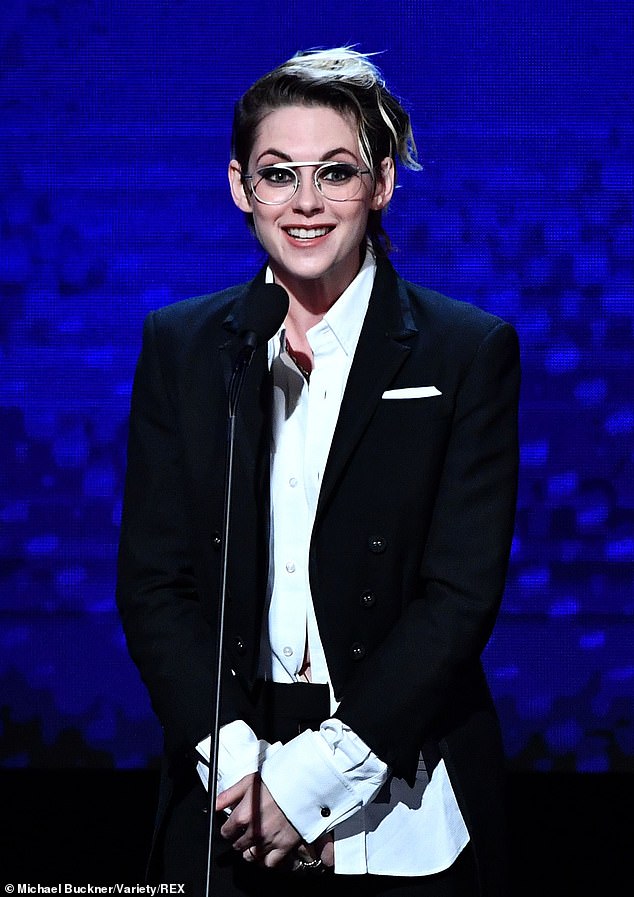 Fashion: Kristen Stewart, 29, showed off her edgy style sense in a black suit and unbuttoned shirt as she attended the American Cinematheque Award gala in LA on Friday

Twilight alum Kristen stood out in a long dress jacket and added some accessories to her outfit in the form of a padlock necklace which sat on her bare chest.

She added another unique touch to the smart suit by pairing it with some white trainers and silver-framed glasses.

Kristen wore her short hair pushed back with her blonde highlights obviously visible on the top of her head. 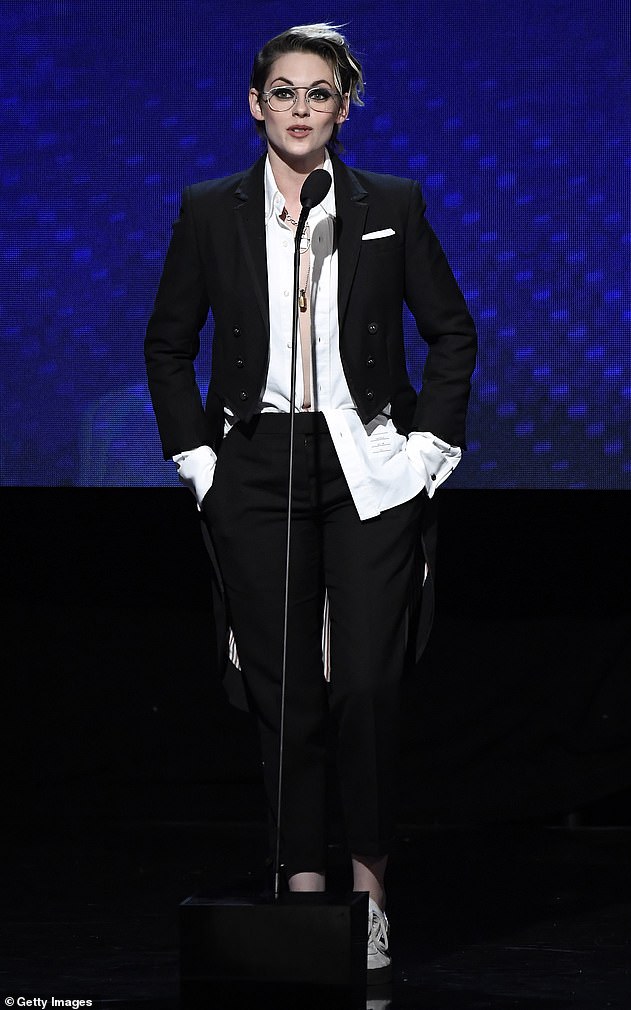 Unusual: The Twilight actress wore a black blazer jacket with an unbuttoned white shirt which flashed some skin as she gave a speech praising Charlize Theron

The actress lead the celebrity revellers honouring Charlize Theron for her acting and producing projects on the night.

During her speech Kristen said: ‘Allow me to fall at your feet. This person’s ability and strength blows my f***ing hair back. She scares me when she wants to.

‘I would follow her into battle and I hope to. I support her cause. I trust her.’ 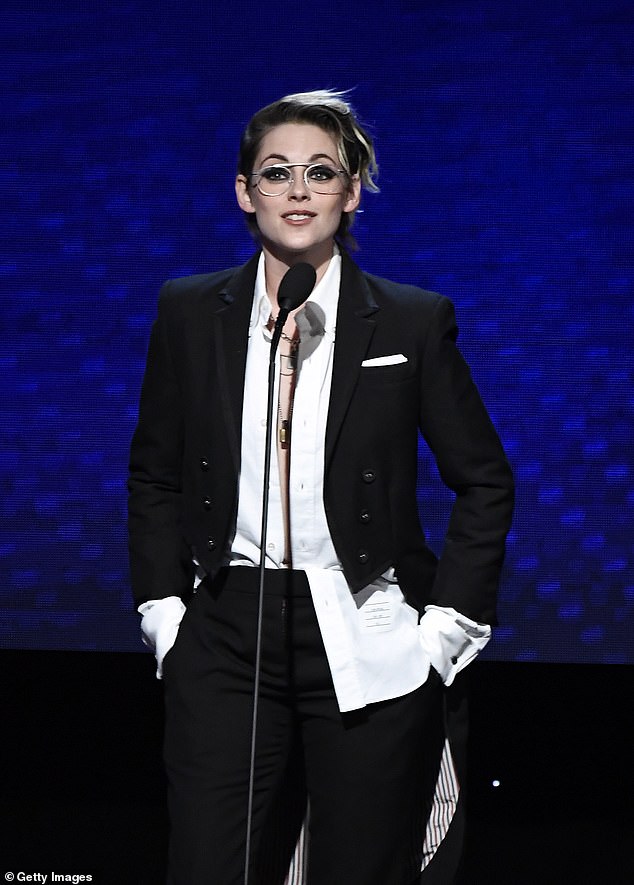 Full of praise: Kristen said ‘I would follow her into battle and I hope to. I support her cause. I trust her’ when speaking about her Snow White And The Huntsman co-star Charlize

Charlize and Kristen co-starred in Snow White and the Huntsman in 2012, which was overshadowed by Stewart’s alleged affair with director Rupert Sanders.

The South African Oscar-winning actress, 44, won the American Cinematheque Award for her career at the event on Friday.

Charlize won the best actress Academy Award in 2004 with her turn as prostitute and serial killer Aileen Wuornos in ‘Monster.’ 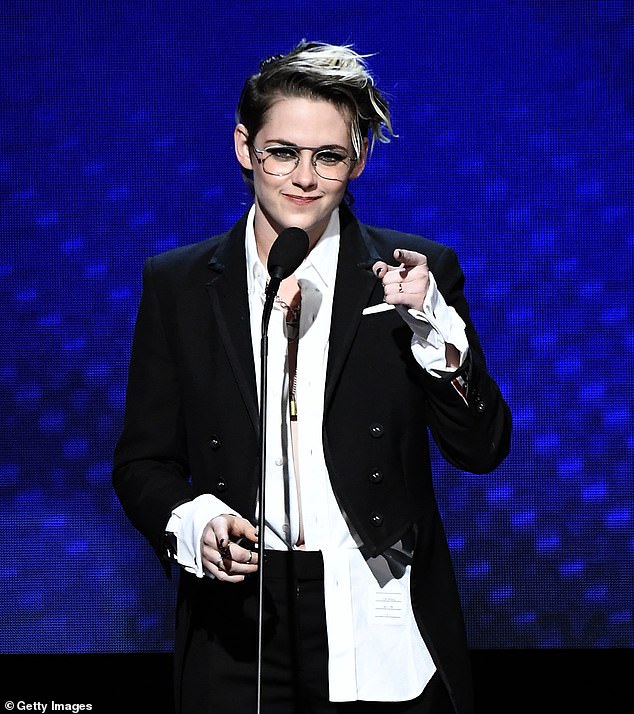 Award: Charlize and Kristen co-starred in Snow White and the Huntsman in 2012 together

The incredible performance earned Hollywood’s respect after she put on 30 pounds and rendered herself unrecognisable with makeup and prosthetics to play the murderer.

Charlize’s rumoured ex-boyfriend Seth MacFarlane also gushed about her at the film festivities. 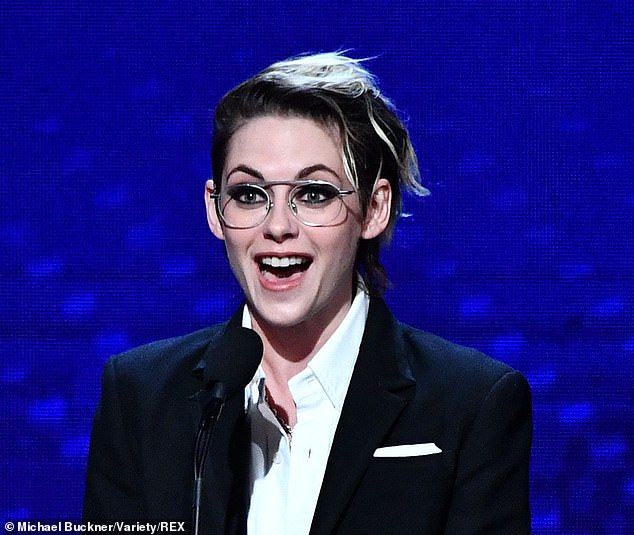 Style: Kristen, whose most recent role is in Charlie’s Angels, wore her cropped hair pushed back with her blonde highlights clearly on display 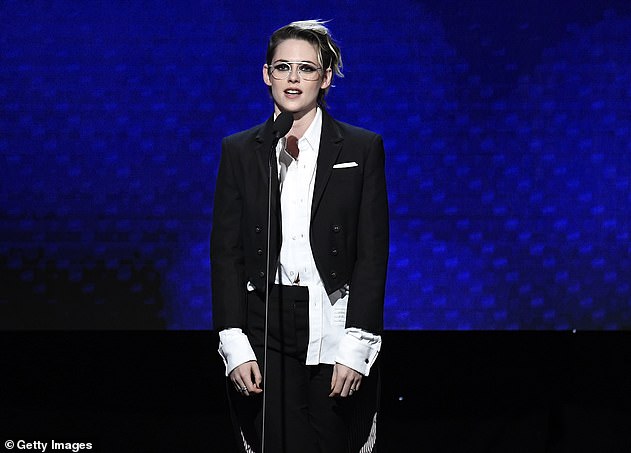 Smart: The actress left one side of her shirt untucked as she took to the stage to do her speech

‘Her acting chops are only matched by her kindness and her professional altruism, and I will always be in her debt.’

In 2014, the she acted in the Oscar-nominated funnyman’s second feature directorial effort, A Million Ways to Die in the West.

Charlize, who will play former Fox News anchor Megyn Kelly for upcoming movie Bombshell, said she was feeling extremely grateful for the award and thanked her celeb pals for their kind words. 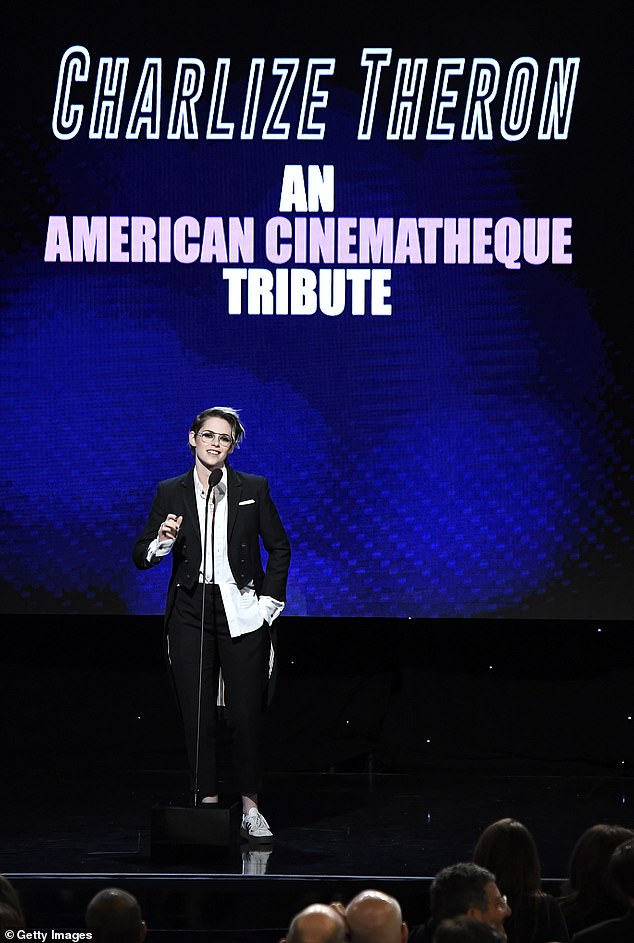 Praise: As well as Kristen, pictured, Seth MacFarlane and director Jay Roach spoke about how incredible Charlize is

She said: ‘Hearing people say nice things about you doesn’t always feel right. So much of what has gotten me to the stage is luck & the kindness of others.

‘Yes, I worked hard. Yes, I pushed myself. But luck was a big part of this and I’ll never forget that. I could never have dared to dream all of this.

‘I am filled with gratitude for this night, for all the unbelievable opportunities I’ve had, for the people who believed in me, and for the movies.’ 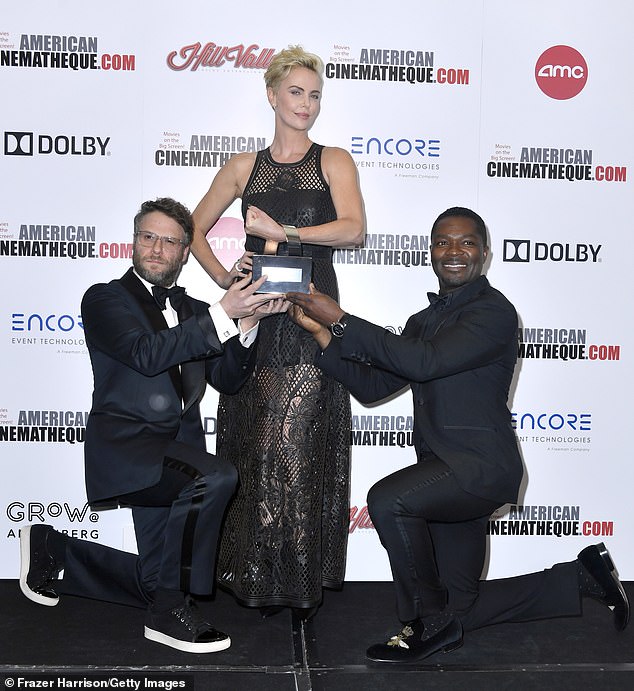 Go back to black like Charlize in a dress by Dior

Charlize Theron stole the show as she stepped on stage at the American Cinematheque Award Presentation in this show-stopping Dior gown.

We love the chic, all-black look and that fit and flare silhouette is extremely flattering. With a racer-back design and a semi-sheer skirt, Charlize’s dress has her standing out from the crowd.

It’s bespoke, so unfortunately can’t be shopped. Instead, click right to check out more from the luxurious label. Or, if Charlize has you inspired, head to the edit below for our favorite lookalikes. These affordable gowns prove you don’t have to break the bank to look like an A-lister.

* PRICES MAY NOT BE AS ADVERTISED