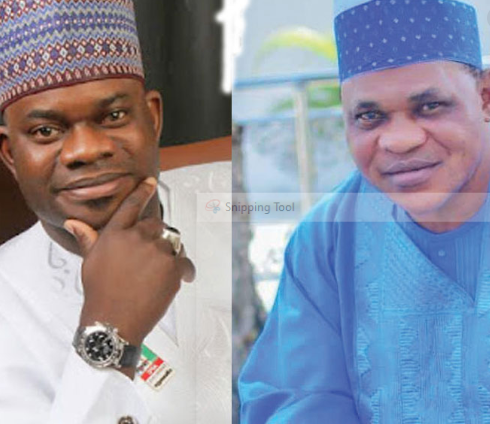 Suit No. FHC/ABJ/CS/1147/2019 Femi Joseph v Peoples Democratic Party (PDP) and two others is a suit climbing through the Federal High Court with the other two defendants as Independent National Electoral Commission (INEC) and the candidate of the PDP in Saturday’s Kogi State governorship polls, Engr. Musa Wada.

The suit was instituted by way of an Originating Summons at the Federal High Court, Abuja on 27th September 2019, shortly after the publication of Forms CF001 (Particulars of persons seeking election to office) of all candidates in the Kogi gubers by INEC.

The Claimant by virtue of Section 31(5) & (6) of the Electoral Act, 2010 (as amended) claims he reasonably believes that the information supplied by the PDP Candidate, Musa AtayWada in both his Form CF001 and the attached First School Leaving Certificate as to his primary school education were false. 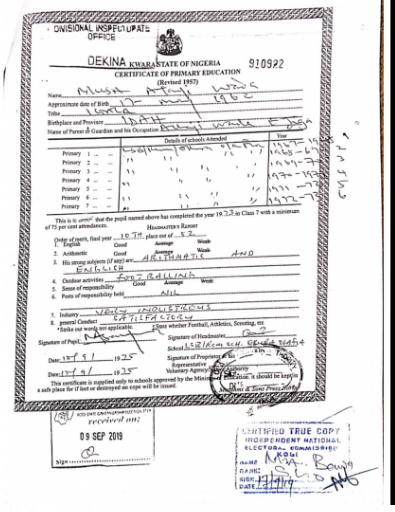 He therefore prayed the Court to determine that the information was indeed false and, on that basis, disqualify the Plaintiff from contesting as the candidate of the PDP in the upcoming November 16th, 2019 gubernatorial elections. While the PDP as a Party has responded to the said suit, Engr. Musa Wada has shied away from debunking the claims.

Initially, this case was merely a bomb which may or may not detonate. Recent events have now lit its fuse and a detonation of PDP’s and Wada’s electoral chances is no longer a question of ‘if’ but of ‘when’. New documents have emerged direct from relevant authorities which prove that the primary school certificate submitted by Wada to INEC is not only a forgery but an amateurish one. In other words, the dormant bomb has suddenly become a ticking time-bomb. 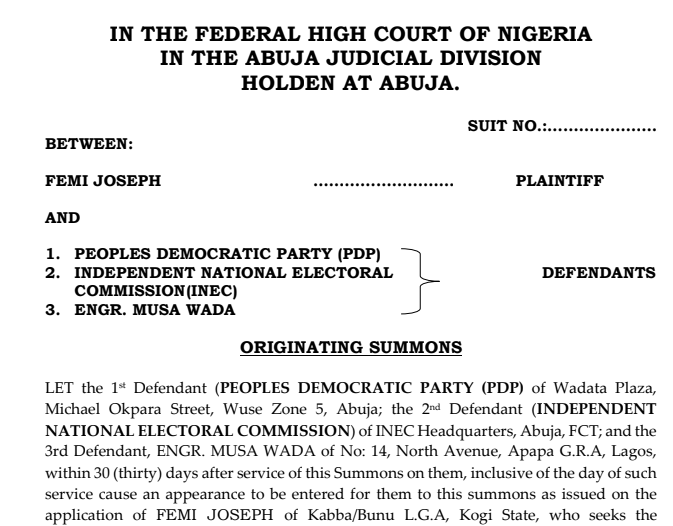 We had a panel of lawyers review the case filed by the Plaintiff, the defence by the PDP and all old and new documents in support. There is no doubt about it, the Plaintiff’s case and the available proof is certainly strong. Like we said esrlier, it is now a question of ‘when’ not ‘if’ Wada and the PDP will be disqualified for submitting forgeries to INEC.

‘The intention of the Constitution is that anyone who has presented a forged certificate to INEC should stand automatically disqualified. No decent system or polity should condone, or through judicial policy and decisions, encourage the dangerous culture of forging certificates with impunity to seek electoral contest.’

One thing is certain now. Engr. Musa Wada is finding it difficult to defend himself. He is yet to respond to the suit and the time for such a response has expired. It can be safely assumed that facts undenied have been admitted by him. when the time within which to do so as ordered by the Court has expired.

With the Supreme Court’s  position in mind, a causal examination of the Primary School Certificate quickly show some  serious, and criminal, discrepancies. Wada’s signature on the FSLC which he allege signed in 1975 is the same as his current adult signature appended on his form CF001 to INEC. The serial number does not belong to the class he claims to have graduated with, meaning Wada’s is a forgery.

The case will come up again on the 20th day of November 2019. The PDP and Engr. Musa Wada face disqualification no matter how the election goes on the 16th. This means that the both the party and her candidate will still face hurdles even after the elections.

Their right to even challenge the outcome at the tribunal is now riding on the outcome of this case which claims they ought not to have participated in the election in the first place.

Saturday November 16 is a certainty. The same cannot be said of the labours of the PDP and her supporters. They will be troubled by the uncertainties flowing from their flag-bearer’s conduct for a long time to come.