" > "Immediately I saw the gun, I opened the door and jumped out" - Student narrates how she jumped out of moving vehicle to escape from alleged kidnappers in Lagos - Pearl TV official site

A student, Chijioke Ifeasinachi, has narrated how she jumped out of a moving vehicle to escape from kidnappers in Ikorodu, Lagos.

On that fateful day, November 16, Ifeasinachi left Church at  Agric Bus Stop on Ikorodu Road around 12:30pm and was going home when the incident happened.

“I entered a cab at Agric Junction to Garage junction. Three men – two in the front and one at back in the cab. The driver asked if I had N50 change and I said ‘Yes’. I brought out my phone Samsung Galaxy Note 4 and earpiece and was listening to music,” she narrated.

“On getting to Jumo Park Bus Stop, the driver stopped the car, I thought one of the passengers wanted to alight, but the next thing I heard was the driver said he would not drop the guy that sat beside me, that he saw dollars inside the guy’s bag. The driver said the guy must explain how he got the money else he will take him to the Police station.

“The guy begged him. The driver later said he must give him 10,000 dollars from the money. The guy asked me to plead on his behalf. I asked the driver what he wants the man to do? I said all I wanted was for him to drop me at the Garage where I was heading to before changing the route to police station. After we passed Aruna bus stop, the driver made a turning by the right instead of going straight, I was feeling uncomfortable with the whole conversation. I asked why they were not passing the normal route but they said that was the route they wanted to pass. Not long after, I told them to stop the car and called my dad. I spoke with him in Igbo that it seemed I had entered kidnappers’ car. All the men were Yoruba but it seemed the driver understood what I said, he told me they were not kidnappers, then he made another turning. At this point I started shouting and putting my head and hand out of the window of the car shouting ‘thief,’ ‘kidnappers,’ help me!. The guy beside me then gave his colleague a gun. Immediately I saw the gun, I opened the door and jumped out. I fell on the ground, had injuries on my elbow, aches on my head and back. I noticed a man was driving behind us; he was the one who effected the arrest of the kidnappers, he came back to meet me where I fell, my father and my brother also came, we all went to the police station and I was later taken to the Hospital,” she said.

Ekechukwu also thanked the human right that attended to the case and took it up.
The Human Right of TeensPlight Foundation for Health and Development, Titilola Oladejo-Davids said Ifeasinachi, came to their office to report the incident and she took it up.

“There was a case of Kidnap at the St. Augustine Catholic Church, Okeria Bus Stop near Agric Junction, Ikorodu on November 16 which the survival reported to my office. The girl was about to be shot when she was not cooperating with the kidnappers but she bravely kicked the door and risk jumping out of the fast-moving vehicle, which resulted in bruised hands and serious pain. She jumped out of the car and nearly escaped being hit by the coming vehicle, the other driver noticed the girl must be in danger for her to jump out of the vehicle in front of him, he bravely followed the kidnappers till he pinned them down at Solomade, and called the police to arrest the kidnapers before going back to the scene of the crime and carried the girl, who had already fainted, revived her and took her to the police station in order for them to see the proof. After which he left the scene, and refused to drop his phone number because he told someone that he could not trust that police would not turn the case against him.

“The police were initially playing around the case, they told the father of the girl that he must have big money to be able to pursue the case and that he must bring a lawyer before they can transfer the case to the Court. I observed the police were kind of intimidating the father and the girl. They made things difficult before they could charge the case; they were trying to bury the case and intimidate me as well but, I refused to be intimidated because justice must prevail. They also charged the case from kidnapping to Fraud.”

She said all her efforts were not just for the girl but for the man and to ensure the kidnappers face the wrath of the law.

“We were the ones who provided the vehicle to convey the kidnappers from police to court and to prison. At the prison, they said I must pay N3,000 before they can collect the suspects or else they will reject them.” 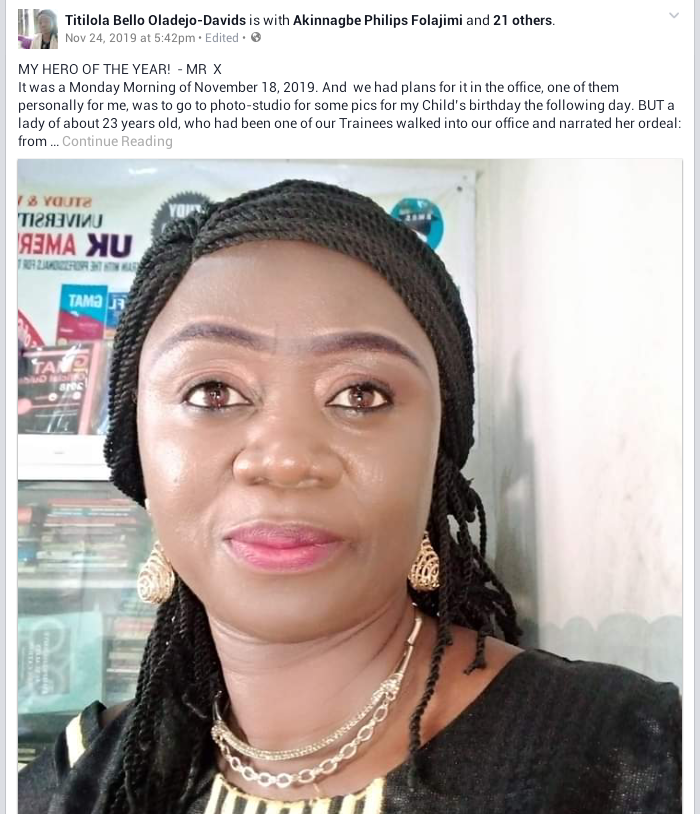 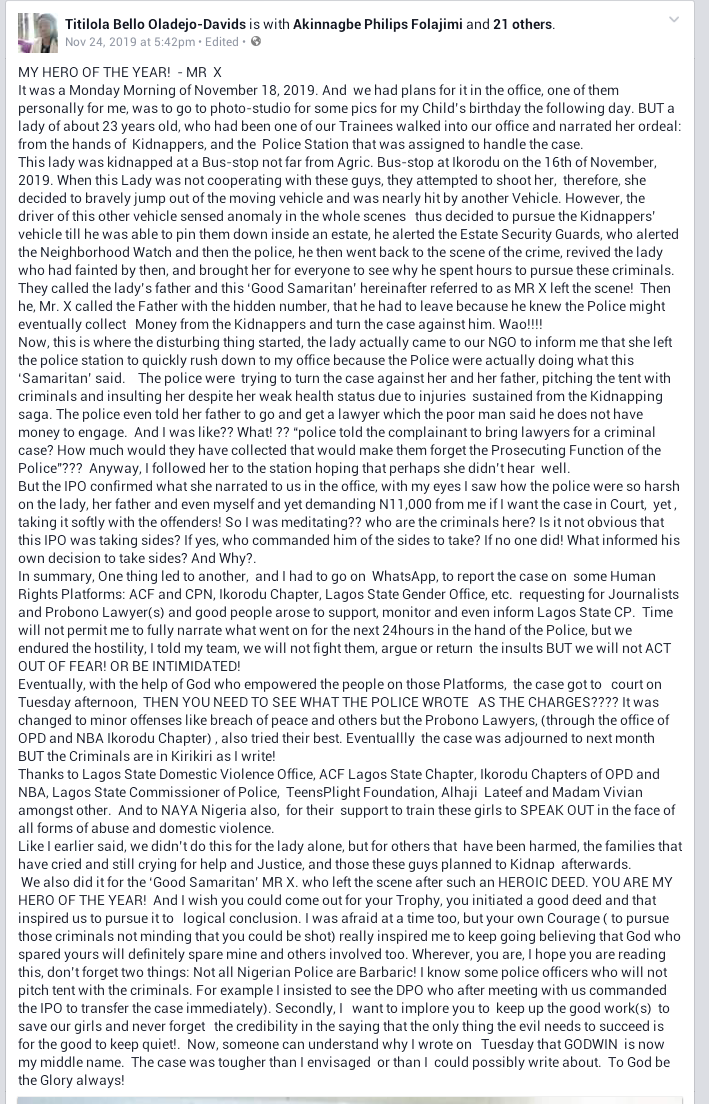