" > Halsey, Gigi Hadid and other celebrities support Taylor Swift amid her battle to get the rights to perform her own music at the AMAs - Pearl TV official site

Celebrities are speaking out in support of Taylor Swift after the 29-year-old singer penned an open letter claiming that Scooter Braun – who has bought rights to her music – and Scott Borchetta are not allowing her to perform her own music live unless she agrees to their conditions.

Back in July, Taylor spoke against losing the rights to her early music catalog and branded the deal as “gross”.

Then, on Thursday, she revealed Scooter Braun and Scott Borchetta are not letting her perform her own music live. She also said they’ve banned her from using her music in a forthcoming Netflix documentary about her life, which has been in production for several years .

Don’t know what else to do pic.twitter.com/1uBrXwviTS

Following her revelation in the open letter, a number of celebrities and fans slammed Scooter Braun and Scott Borchetta. They took Taylor’s side using the hashtag #IStandWithTaylor.

Gigi Hadid and Halsey are some of the celebrities who have spoken in support of Taylor Swift.

Gigi tweeted: “Scott and Scooter, you know what the right thing to do is. Taylor and her fans deserve to celebrate the music!!”

Halsey told fans she was “trying to choose her words wisely” then said: “Not only are we looking at an awful business move, (because one would be incentivized to allow Taylor to perform her songs seeing as it would direct to rediscovery of a catalog they currently profit off of?????) but this is just mean. This is punishment. This is hoping to silence her from speaking about things by dangling this over her head. 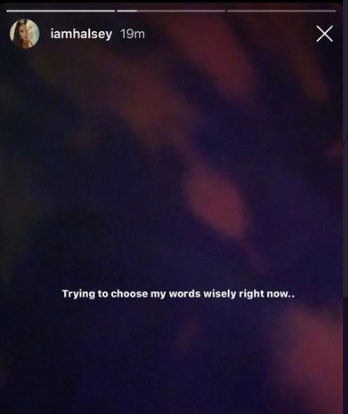 “These people are protected because they inspire complicity with fear. Banking on the illusion that people will not stand up for her. That the world will say she is over reacting. You’re barking up the wrong tree. It is her grace and patience in these moments that make her Artist of the Decade.” 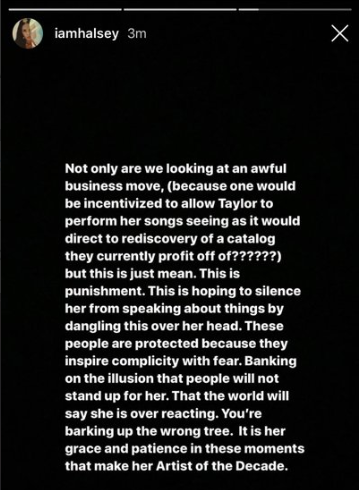 Rebecca Black commented on the row, writing on Twitter: “what a complete power pull @scooterbraun @scottborchetta.

“The way this industry is set up, there are times where we have to get legal permission to perform anything we share rights to. but denying access like this is solely to play with and diminish a person.”