Hailey Baldwin sent a loving message to her aunt, Hilaria Baldwin after she revealed she has sadly suffered her second miscarriage.

Hilaria, 35, who is married to Alec Baldwin, 61, and was four months pregnant,  shared the sad news on Instagram on Monday, hours after her scan.

Hailey, whose father is Stephen Baldwin, shared in the comments: ‘I’m so sorry, love you guys,’ and Hilaria sent back a yellow heart emoji.

Scroll down for video 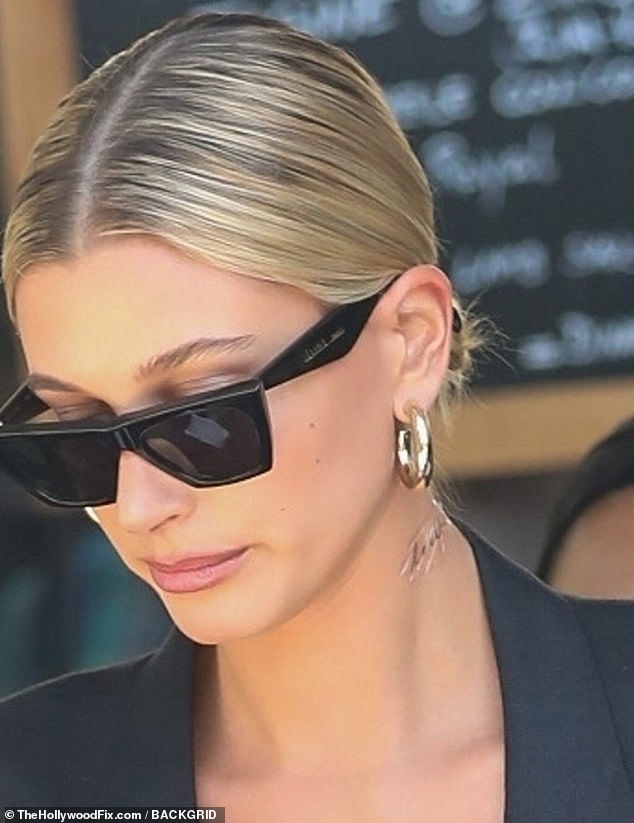 ‘I’m so sorry, love you guys’: Hailey Bieber sent Hilaria Baldwin a loving message after she revealed on Instagram on Monday she’s suffered a miscarriage four months into her pregnancy

Kindness: Hilaria wrote back with a yellow heart emoji as she battled with her grief

Hilaria had written: ‘We are very sad to share that today we learned that our baby passed away at 4 months.

‘We also want you to know that even though we are not OK right now, we will be. We are so lucky with our 4 healthy babies – and we will never lose sight of this.

‘I’m really devastated right now… I was not expecting this when I went to my scan today. I don’t know what else to say.’ 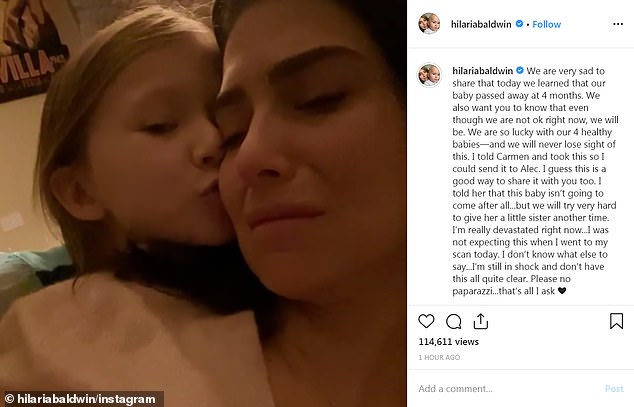 Upset: Hilaria revealed her sad news in an Instagram post, as well as a video of herself lying in bed being comforted by her six-year-old daughter Carmen (above)

She also shared a video of herself lying in bed being comforted by her daughter Carmen, six, soon after she told the child the news.

‘I told Carmen and took this so I could send it to Alec,’ she wrote to her followers.

‘I guess this is a good way to share it with you too. I told her that this baby isn’t going to come after all… but we will try very hard to give her a little sister another time.

‘I’m really devastated right now…I was not expecting this when I went to my scan today. I don’t know what else to say…I’m still in shock and don’t have this all quite clear.’ 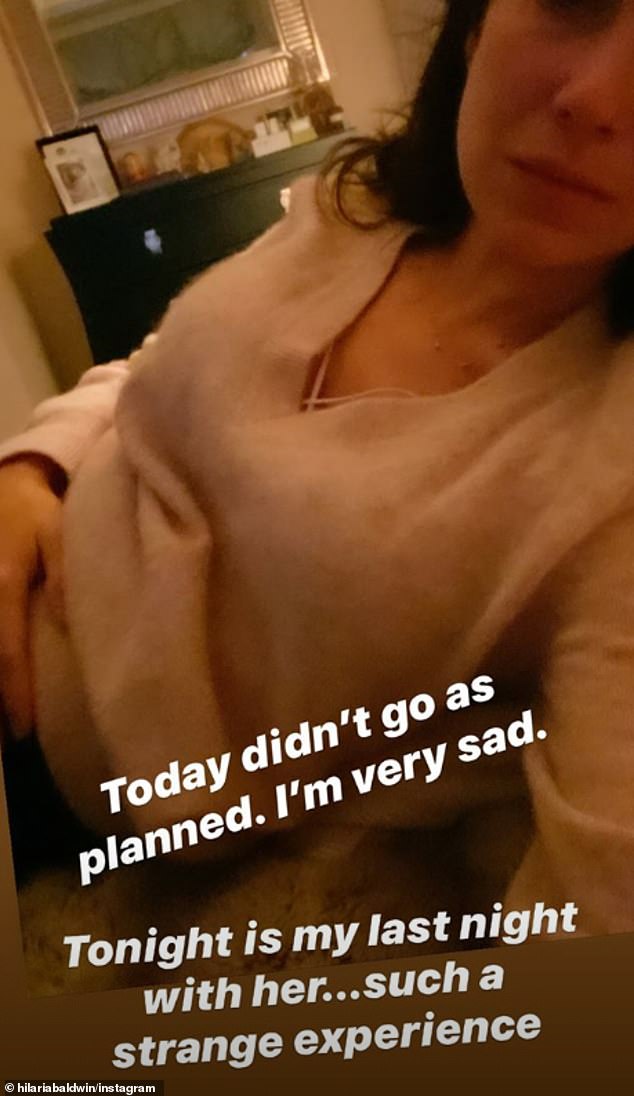 Sharing her pain: Hilaria also an Instagram story of herself cradling her bump in bed just hours after she went for a pregnancy scan and was told the devastating news

In the video, Hilaria thanked her daughter for saying she was sorry she had lost the baby before the six-year-old kissed her mother on the cheek.

Taking to Instagram Stories, Hilaria shared an Instagram story of her cradling her bump in bed with the caption: ‘Today didn’t go as planned. I’m very sad. Tonight is my last night with her… such a strange experience’.

She also wrote: ‘Today opened and it was not a nightmare, just a sad reality. Thank you for all your kind and sympathetic words. 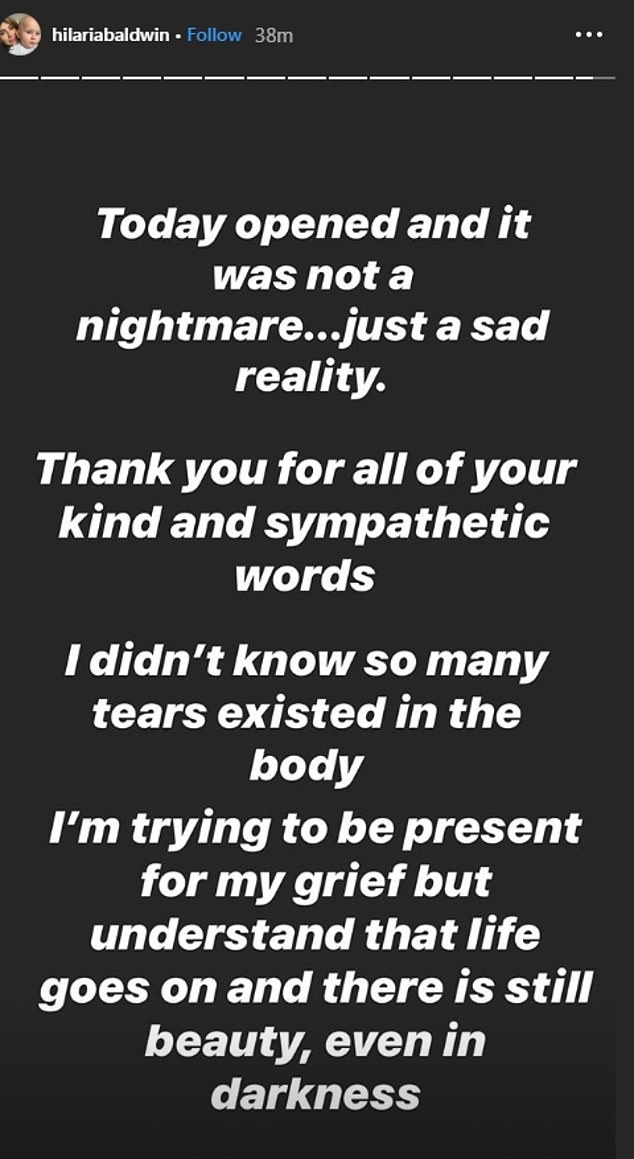 Beauty in the darkness: Hilaria also shared this post about her grief on Instagram stories on Tuesday

‘I didn’t know so many tears existed in the body. I’m trying to be present for my grief but understand that life goes on and there is still beauty, even in darkness.’

Prior to being told the devastating news, Hilaria had shared several posts on her Instagram story showing off her growing bump and heading to her scan.

Hilaria had revealed in September that she was expecting her fifth child with husband Alec just months after they suffered another miscarriage back in April. 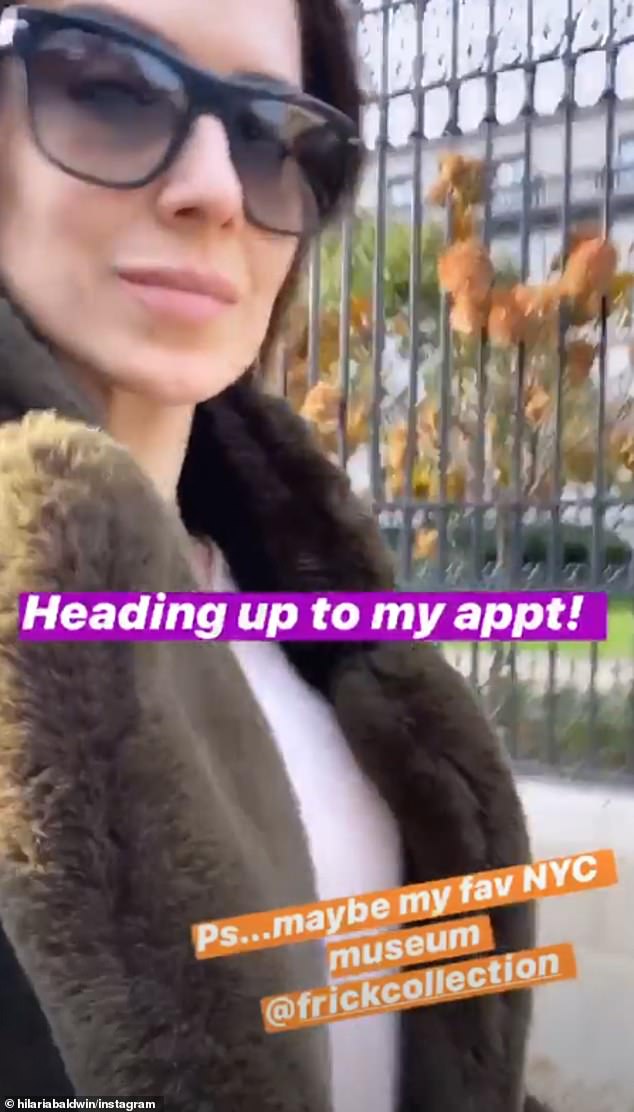 Sharing: Prior to being told the devastating news, Hilaria had shared several posts on her Instagram story as she went to her scan 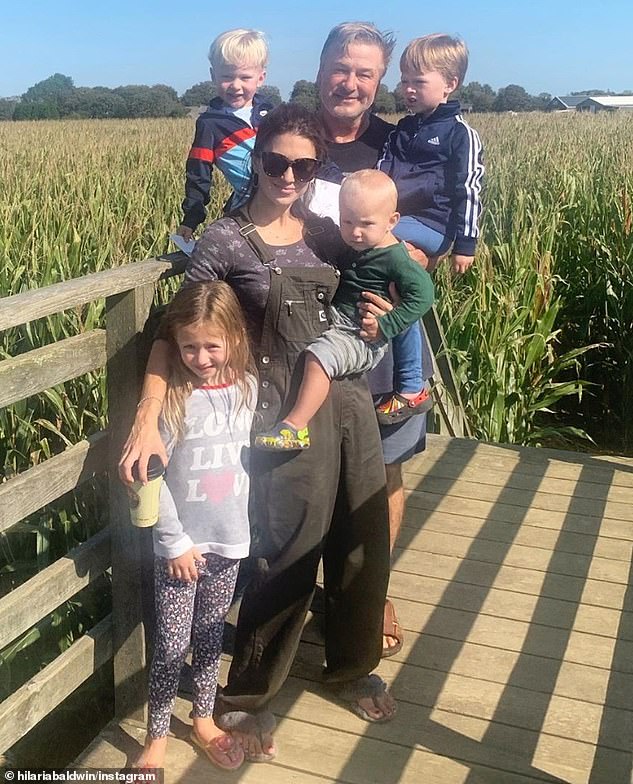 She revealed news of her first miscarriage on Instagram by posting an image of herself in her lingerie holding her small bump.

The mother had written in the caption that she was ‘most likely experiencing a miscarriage’.

‘I want to share with you that I am most likely experiencing a miscarriage,’ began the yoga guru in a lengthy Instagram caption. ‘I always promised myself that if I were to get pregnant again, I would share the news with you guys pretty early, even if that means suffering a public loss.’ 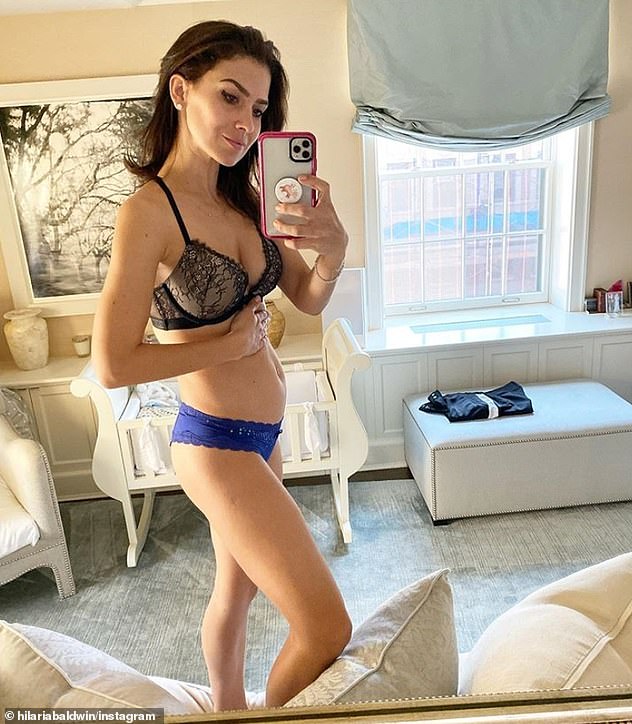 Journey: Hilaria had revealed in September that she was expecting her fifth child with husband Alec just months after they suffered another miscarriage back in April. She is pictured above after announcing her pregnancy

Days later, she confirmed the news after visiting the doctor in order to get a scan – which revealed that her unborn child did not have a heartbeat.

Once again sharing the news on Instagram, Hilaria posted a family photo and wrote: ‘There was no heartbeat today at my scan…so it’s over…but I have some pretty strong and amazing heartbeats right here.

‘I am surrounded by such love and I feel so fortunate. Thank you all for listening, for your support, and for sharing your own personal stories.

‘We are stronger together…I hope this conversation continues to grow and that we stick together through both the beautiful and challenging moments in life. Much love and appreciation to all of you.’

Alec and Hilaria, who married in 2012, have four children together – Carmen, six, Rafael, four, Leonardo, three, and Romeo, 15 months. Alec also has a 23-year-old daughter, Ireland, with his ex Kim Basinger.

Open book: In an effort to erase the stigma surrounding miscarriage, Hilaria shared this intimate photo with a caption detailing her thoughts back in April