It was a philosophical Pep Guardiola who emerged from this win to assess what it has done for Manchester City’s title hopes.

Defeat would almost certainly have signalled the end. Instead, victory saw City climb back above Chelsea into third place and keep Liverpool in sight.

Winning and losing. Success and failure. Guardiola, a serial winner, perfectionist and touchline jack-in-the-box, was surprisingly serene as he discussed the margins that will define City’s season. The man who was almost carried out of Anfield in a straitjacket a fortnight ago seems at peace with the idea that he may not win a hat-trick of league titles. 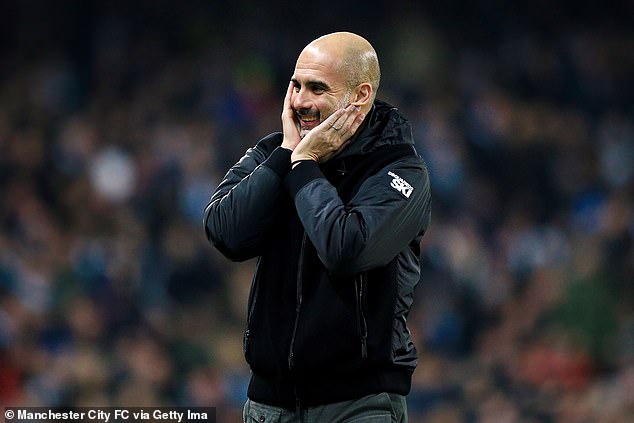 Guardiola’s message? Relax. What’s the worst that can happen? ‘The only pressure we can have is that we are going to lose the Premier League,’ he said. ‘It’s not the first time in Manchester City’s 125-year history. All the questions are about nine-point gap, 12 points. I don’t live the situation that when I’m going to sleep I’m (thinking), “Oh I’m going to lose the Premier League, what is going to happen?”

‘It looks like after we won the last two Premier Leagues you have to win seven in a row and make 200 points every season. It doesn’t work in that way at the high level. Tennis players lose games. In golf, not always Tommy Fleetwood wins the tournament.’

For a moment, Guardiola threatened to get deep on us. ‘I think it’s a message for society,’ he added. ‘It’s not good for our kids, teenagers, to show them that just the winner is perfect. We are creating a depressed people. In football, we want to win. The other is a disaster. It is not. That’s why I said to the players relax, do our job, we will see in January what happens.’

It is not what we’ve come to expect from the Spaniard. Maybe it’s a ploy to take the pressure off his players in what seems to be an increasingly futile pursuit of Liverpool. If so, it will be interesting to see how they respond. But, make no mistake, Guardiola isn’t giving up the chase just yet. He has vowed that City will fight to the finish and they made good on that promise at the Etihad. 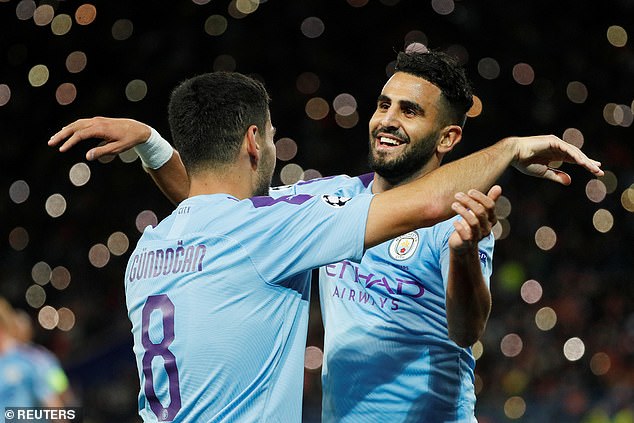 Riyad Mahrez scored the goal of the day as City leapfrogged Chelsea, but they are still behind

Despite falling behind for the second home game in a row, they fought back to beat a very good Chelsea team who led through N’Golo Kante’s effort. City responded with Kevin De Bruyne’s deflected shot and an excellent goal from Riyad Mahrez before Raheem Sterling was denied a third in added time by another of those ridiculous marginal offside decisions by the VAR killjoys.

A City side already depleted by injury and Bernardo Silva’s suspension saw Rodri, David Silva and Sergio Aguero limp off in the second period.

Aguero’s groin strain looked particularly serious and City are waiting to see how long he will be out of action.

For the second time this season, Frank Lampard’s side left Manchester unfortunate not to have got more from the game. 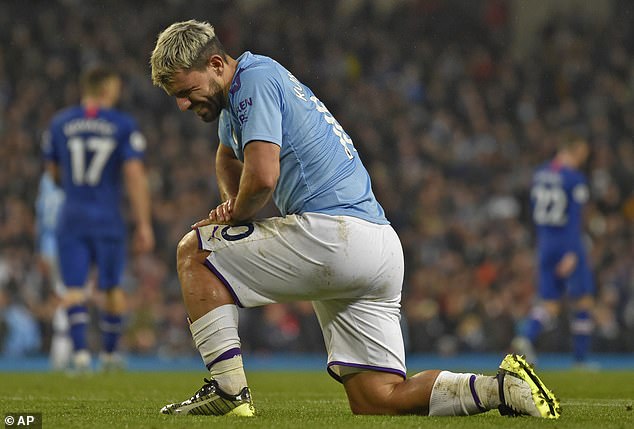 It was a huge improvement on a 6-0 defeat under Maurizio Sarri here in February as Chelsea restricted City to just 46.74 per cent possession. No opponent has done that to one of Guardiola’s teams in a coaching career spanning 11 years and 381 matches.

It was another feather in Lampard’s cap, even though he saw Chelsea’s six-game winning run in the Premier League come to an end. He, too, was keen not to put too much pressure on the shoulders of players who have exceeded expectations this season.

‘Experiences like this are great for them,’ he said. ‘They have to take them on the chin in terms of the defeat but also realise these are the kinds of levels we want to get to.’