From the Wembley posh seats the greats of England teams past must have looked down and wondered why it wasn’t always this easy. Few, if any, of the national side’s previous 999 games had been as straight forward as this one.

Gareth Southgate’s England are safely in to the finals of next summer’s European Championships on the back of a rout that maybe he saw coming. Maybe there was a simple reason why Southgate left out Raheem Sterling after his scuffle with Joe Gomez at team HQ. He simply knew he would not need him.

Why some of the England supporters in a less than full Wembley chose to boo Gomez when he came on as a second-half substitute was as mysterious as it was disappointing. The Liverpool defender was, after all, the innocent party in the incident with Sterling and the reception he received felt very wrong. 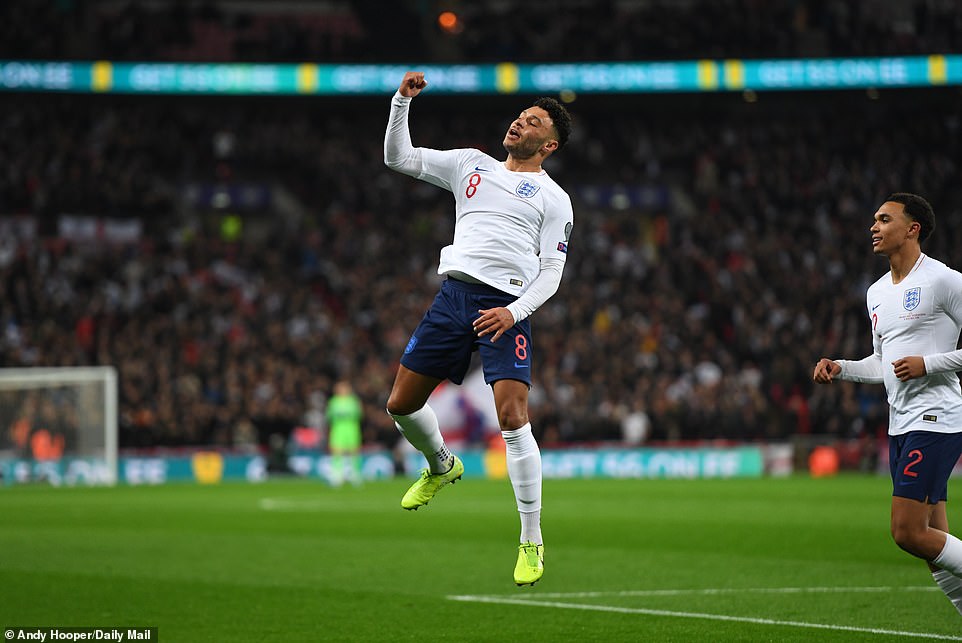 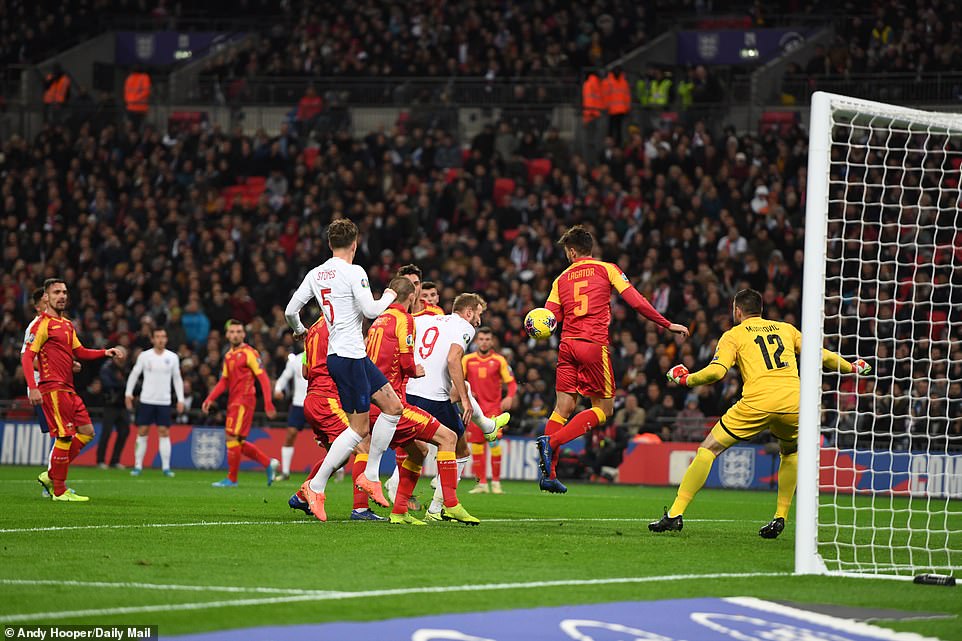 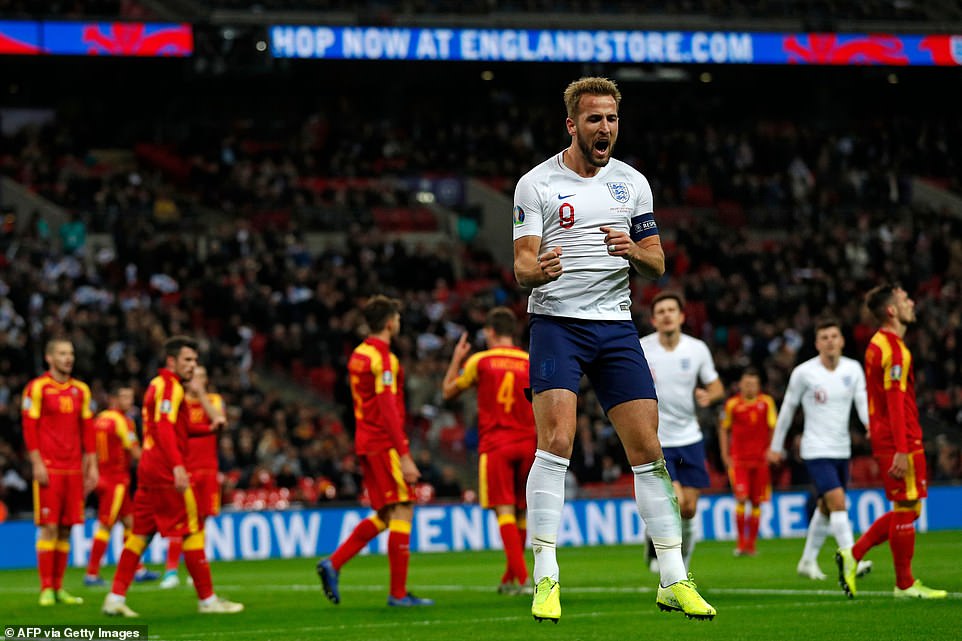 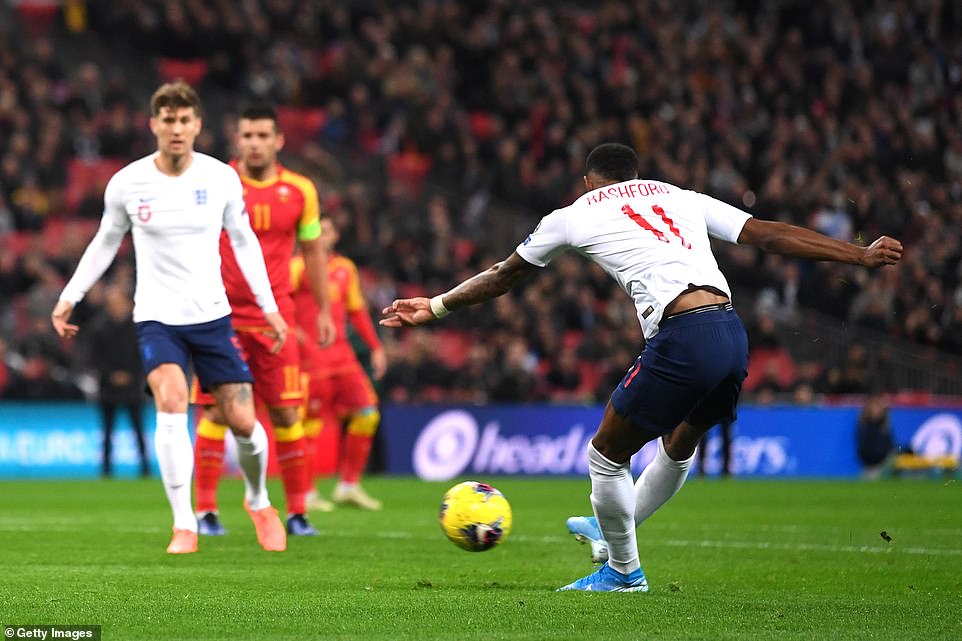 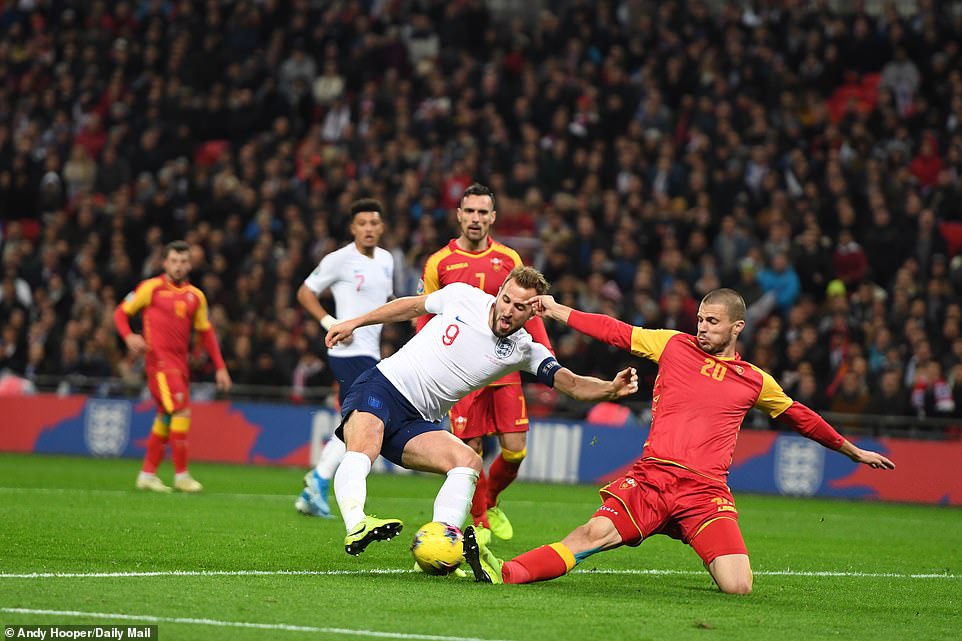 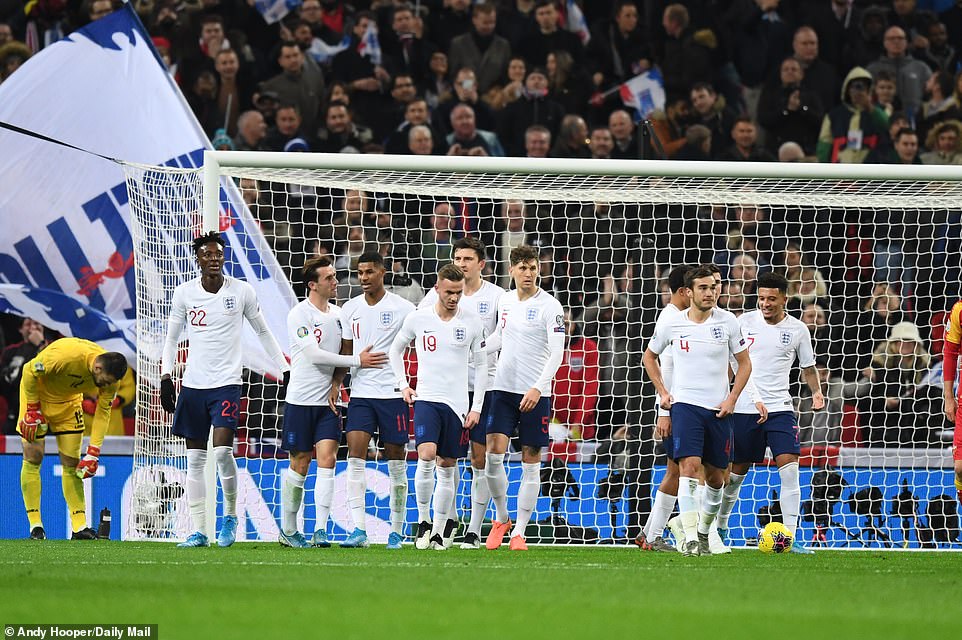 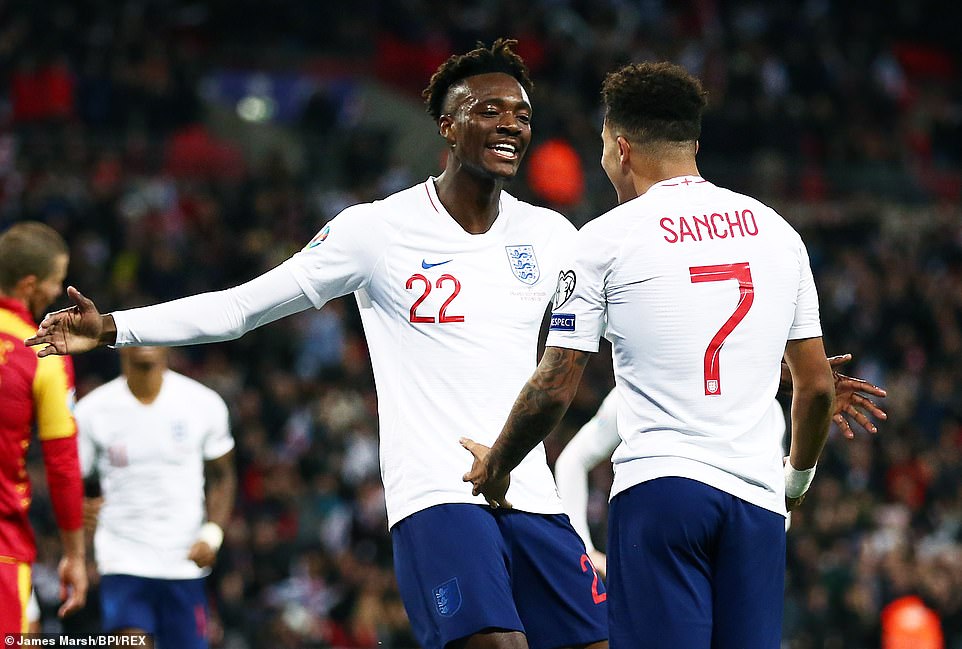 By SAMI MOKBEL at Wembley

Maybe some of the home fans were just a little bit stuck for something to do by then. Maybe they were fed up of cheering goals.

England were already six up at that point – five of them having come in the first half – and could have scored many more against a team that had spent most of the day lounging in the coffee shop of the Wembley Novotel and played here as though they still had their feet up.

Montenegro were as wretched as their international record suggested they might be.

Their defending was catastrophic from the first minute onwards. But England teams have played poor opposition before and not put them away as comprehensively and as mercilessly as they did here.

Southgate has imbued this young and emerging team with many characteristics that should serve them well next summer in a tournament that will see them play their group games at this same stadium. Certainly they are more ruthless.

This is a team that can score goals and enjoys doing it.

The main beneficiary of all this here was England captain Harry Kane whose hat-trick in the first half took his total for his country to 30.

Kane is now sixth on the all-time list and became the first England player to score three times in successive Wembley games, having registered a hat-trick against Bulgaria in September.

He would have scored more on this occasion had he not been replaced by Tammy Abraham with more than half an hour still to go. Abraham was to score his team’s seventh and his first for England late in the game.

It was also a notable night for Leicester left-back Ben Chilwell – who provided the assists for the first three goals -and his club mate James Maddison who finally made his international debut as another second-half substitute.

In terms of the other scorers, Liverpool’s Alex Oxlade-Chamberlain registered the first, Marcus Rashford the fourth and Montenegran defender Aleksandar Sofranac the sixth, an own goal with 25 minutes to go.

With no Sterling in the team, Southgate handed his place to Jadon Sancho but it was another young forward looking to edge his way in to Southgate’s regular first team who struck first. 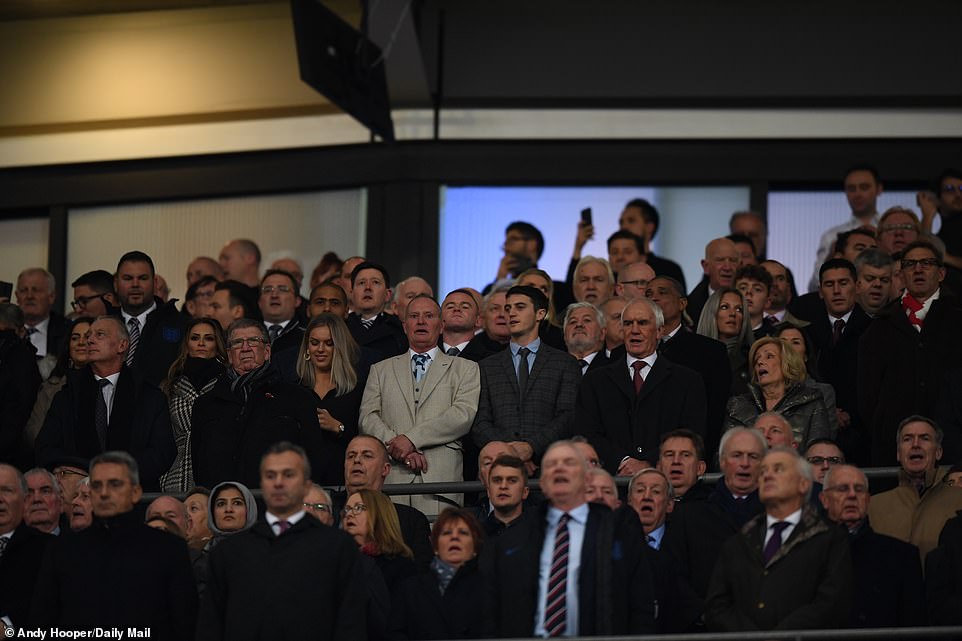 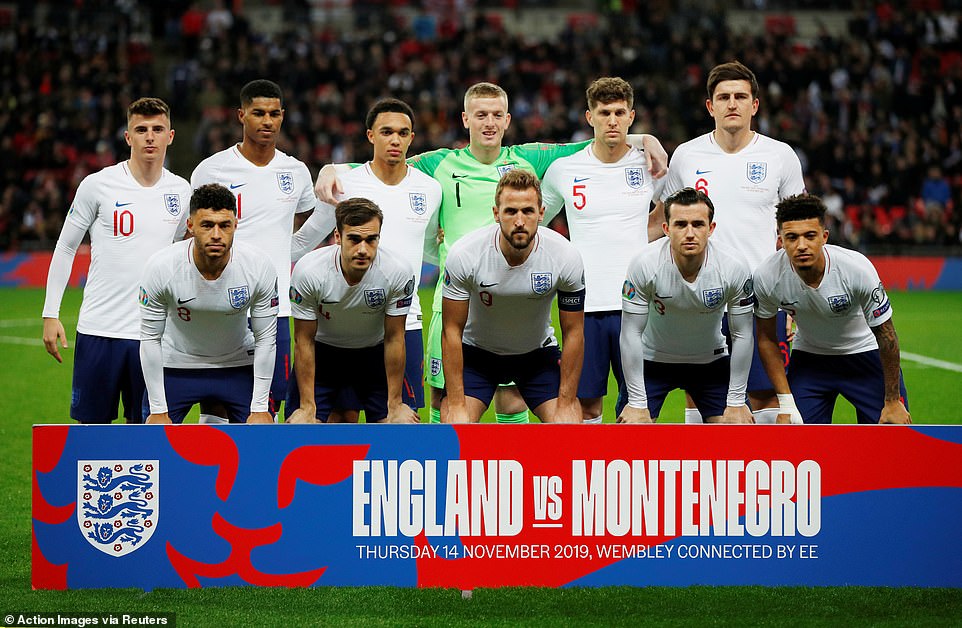 The starting line-up for England’s 1,000th international fixture pose for a photograph at the side of the pitch at Wembley 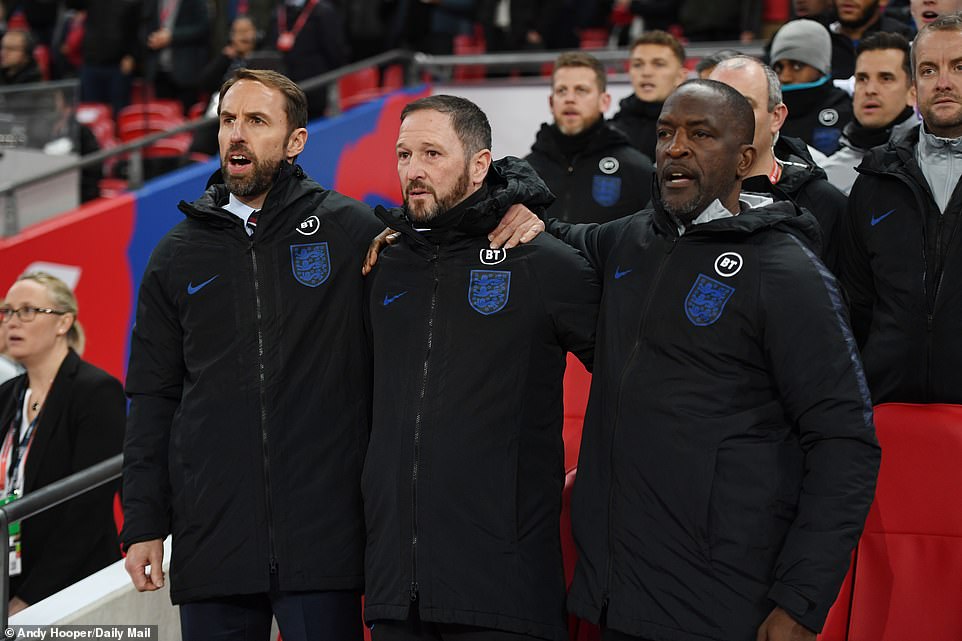 Gareth Southgate, Steve Holland and Chris Powell (left to right) sing the national anthem ahead of the game 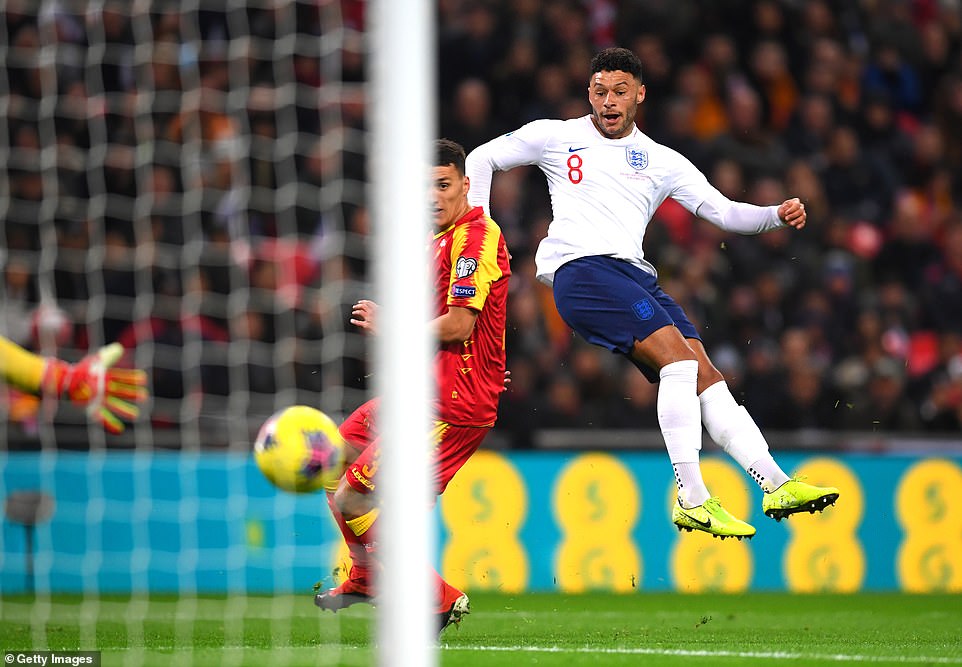 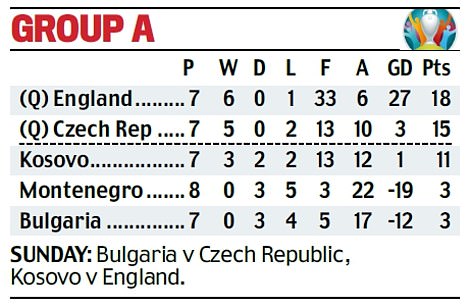 A cross field pass by Chilwell was missed by Montenegro left back Risto Radunovic and Oxlade-Chamberlain rifle the ball back across the goalkeeper and in to the far corner with his right foot.

Kane and Rashford both could have added to the first goal before the captain scored two headers in six minutes.

Both were nicely executed from close range but Kane does not have it as easy as that in the Premier League. The Tottenham striker was pretty much unmarked on both occasions. 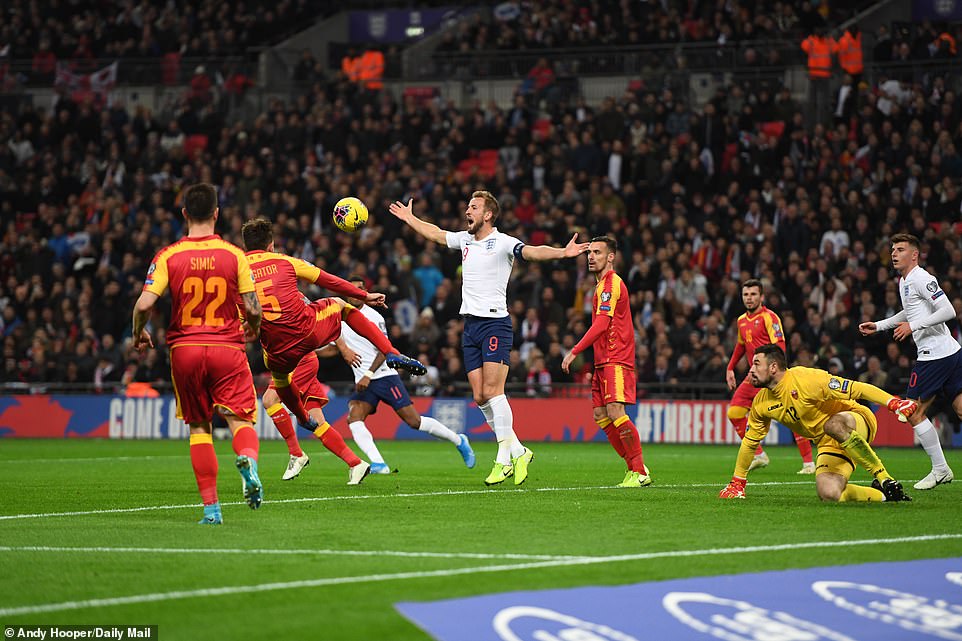 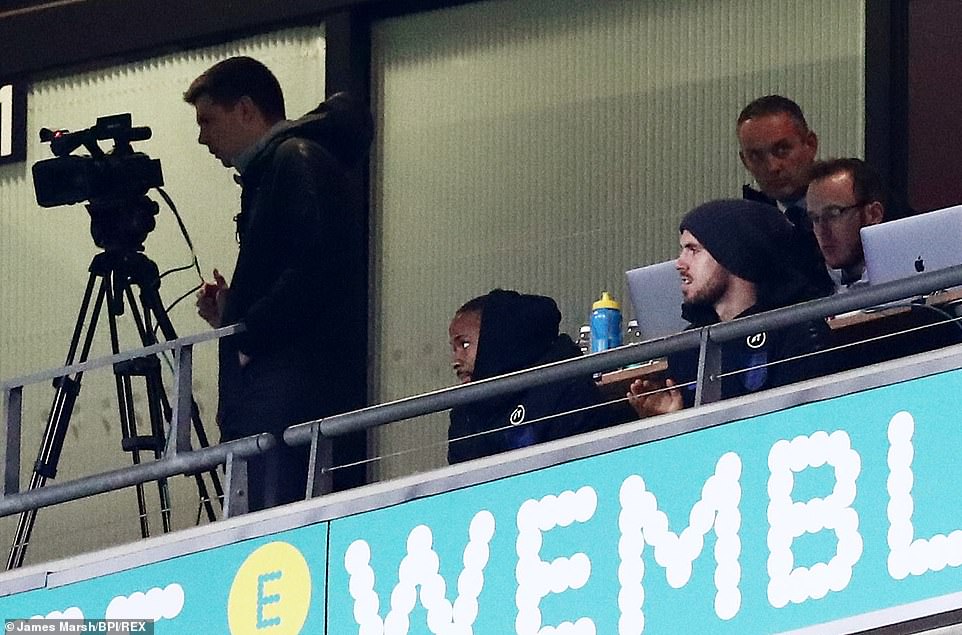 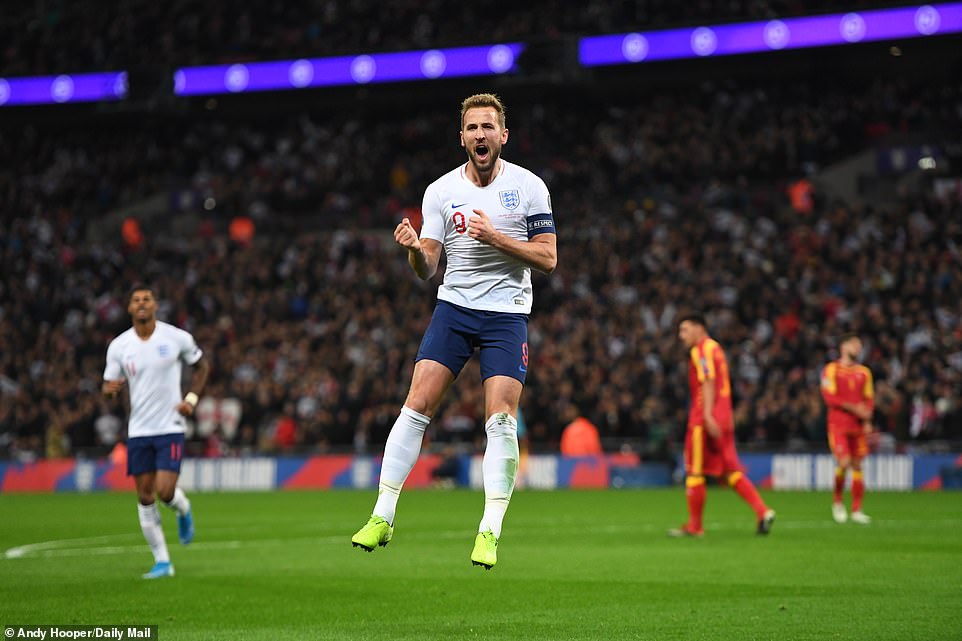 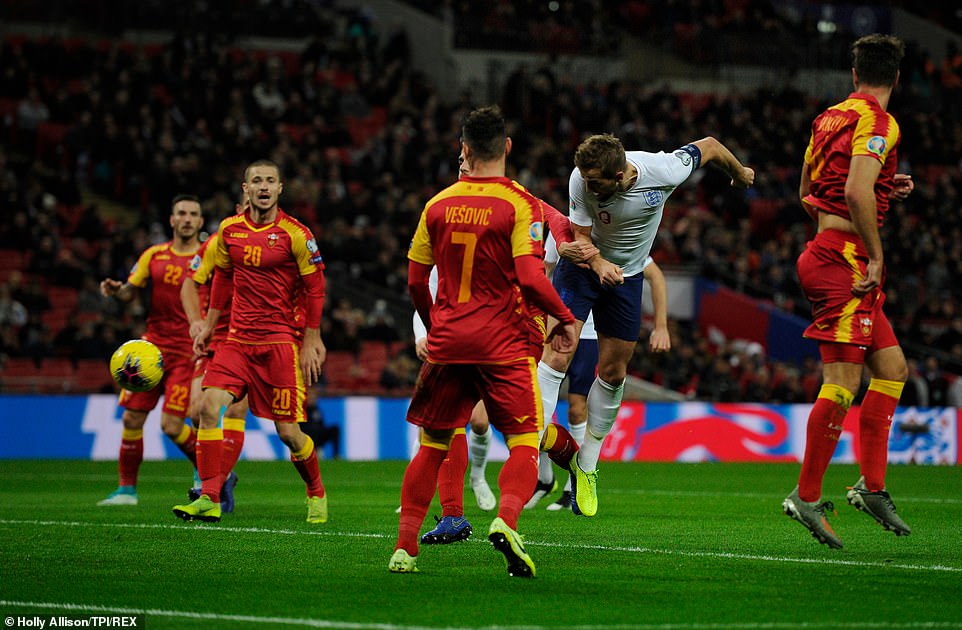 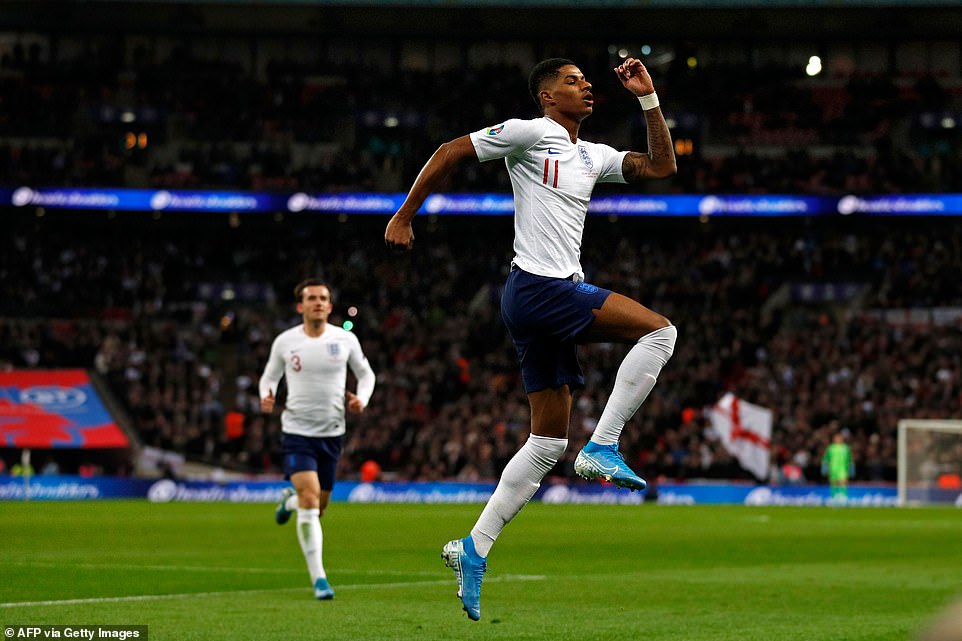 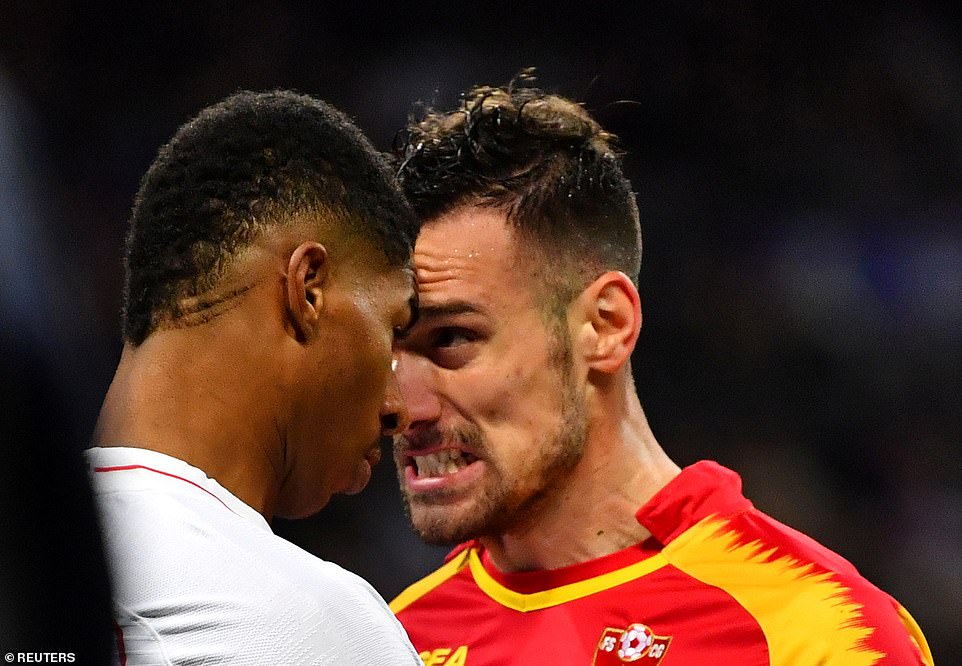 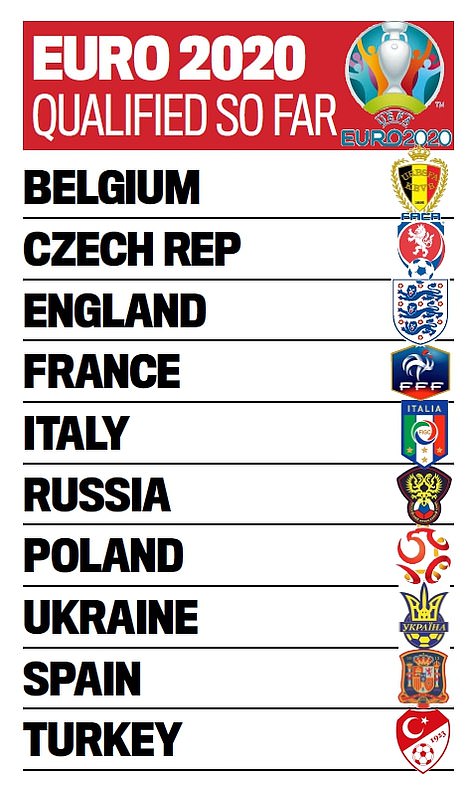 Three goals to the good with less than half an hour gone, England had this game won early.

Goalkeeper Jordan Pickford saved brilliantly when Marko Simic when the opposition central defender wriggled free from a corner and was to make another good stop in the first half, denying Fatos Beciraj as he ran through.

By that time, England were five goals to the good. Harry Maguire looked frankly devastated when his header from a set piece was saved but Rashford was alert to enough to collect the loose ball, turn and shoot low in to the corner.

Then, in the 37th minute, Kane completed his hat-trick from another cross from the right, turning in the ball from six yards after it had dropped to him from a defender.

With England’s record win being 13-0 against Ireland in 1882, this team was going to have to go some to reach that level and in truth a little of the earlier hunger fell away in the second half.

Indeed, when they scored again, they needed some help. Rashford reached the byline and when Mount took aim the ball struck Sofranac and flew high in to the net.

Abraham scored his own landmark goal with a few minutes left – edging in front of his marker to score at the near post – but by then Gomez had made his slightly unfortunate entrance on to the field.

The response to Gomez’s introduction was strange and evidence, perhaps, that there is no such thing as a perfect night for an England football team. This, though, was as close as it is ever likely to get. 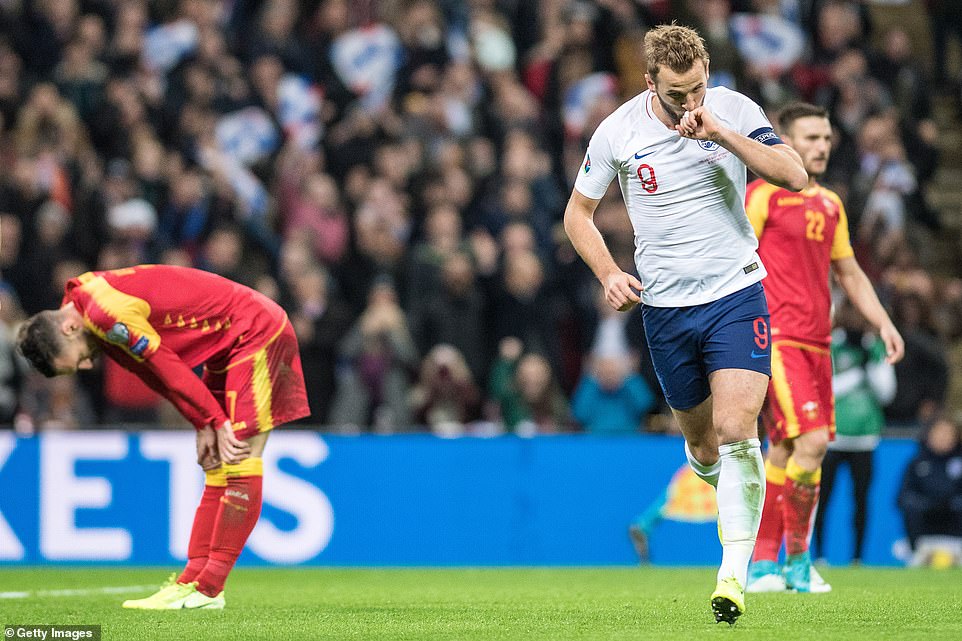 Kane kisses his wedding ring as he celebrates his hat-trick for the Three Lions during their 1,000th international 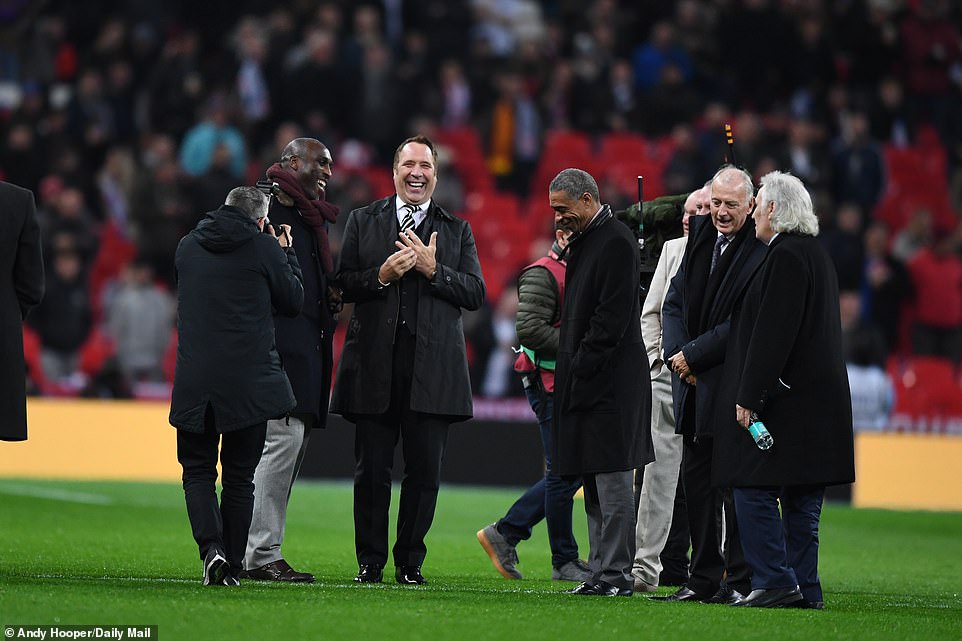 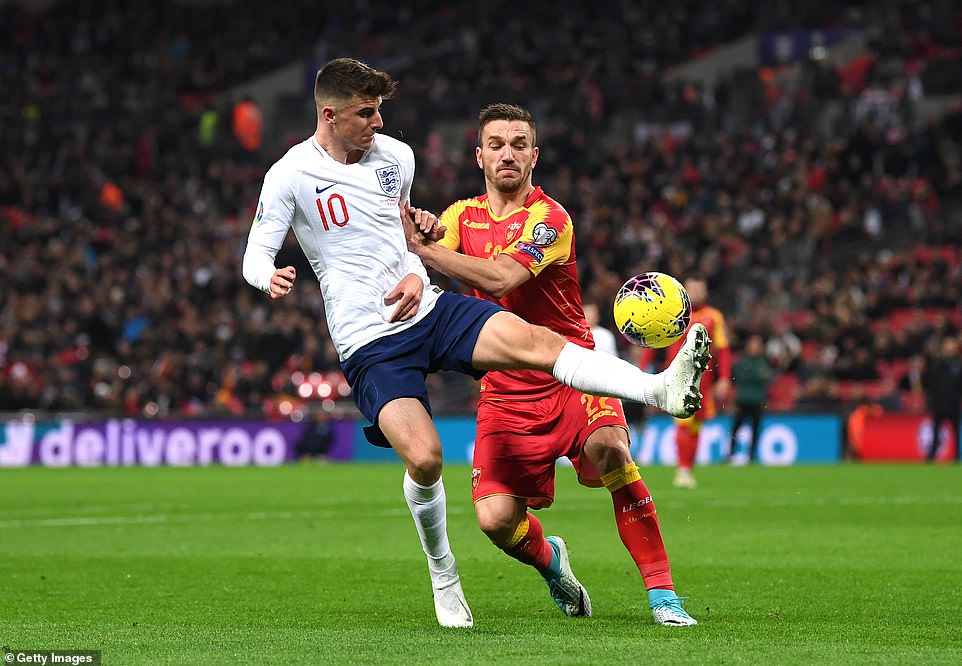 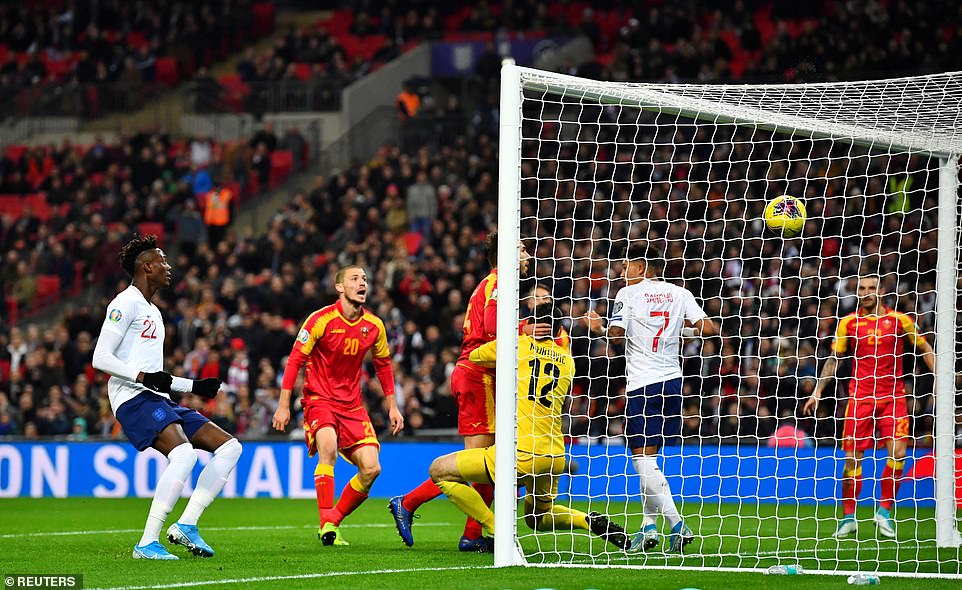 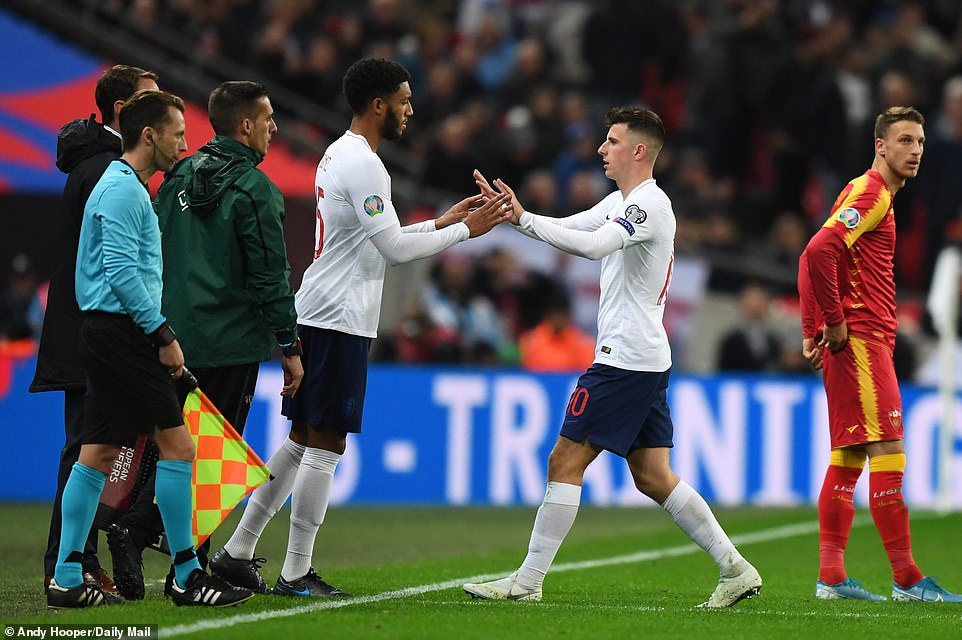 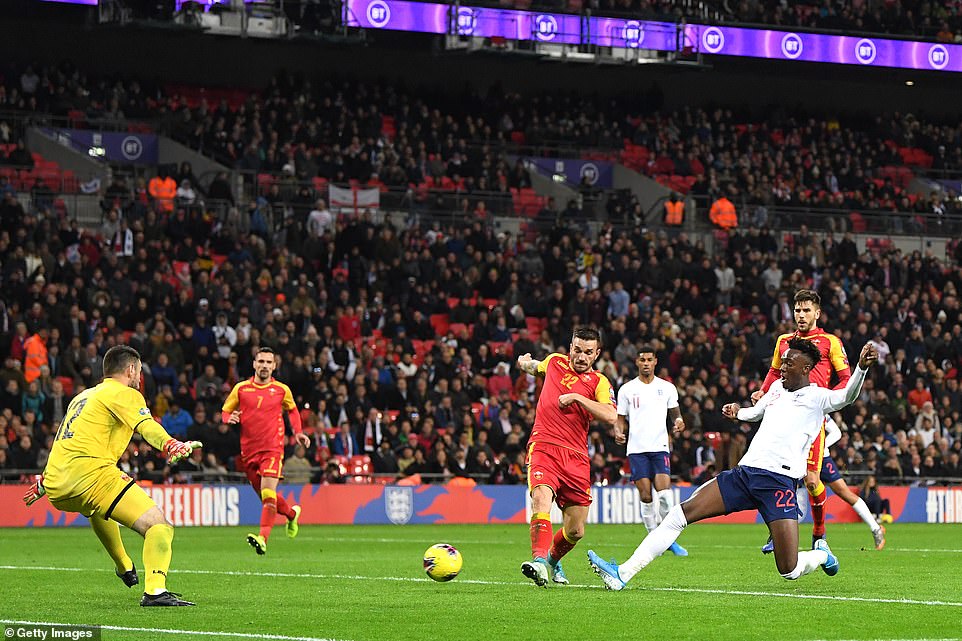 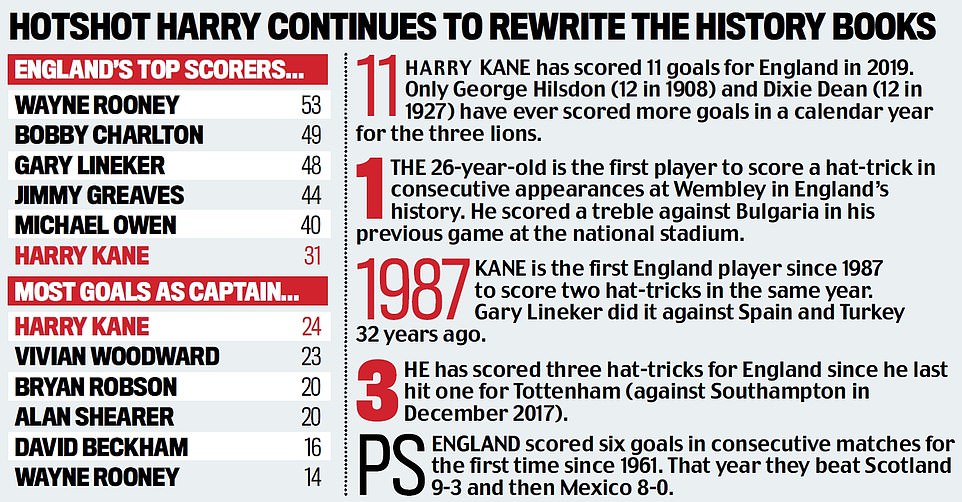