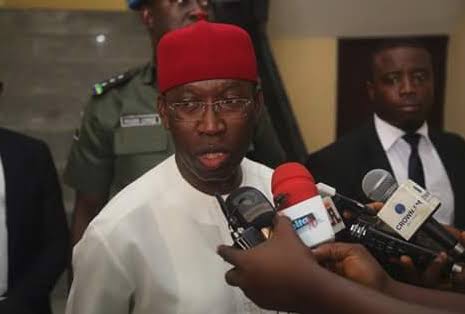 Delta state budget for the 2020, would be nothing to write home about as it would attempt to complete ongoing projects and accommodate few new ones, the state governor, Dr. Ifeanyi Okowa, told journalists.

Okowa, emphasized that the year 2020 budget would not be as bogus as previous years.

Speaking Tuesday with journalists during the quarterly media interaction in Asaba, Okowa said “it is very likely that we will come in the year 2020 with a contracted budget not as big as what we used to have because to some extent our revenues are dwindling.

Giving reasons for the weightless budget, the governor hinted: “It will not be as much as we ordinarily expect. Moreso, when the indices for calculation has shown that we are going into year 2020 with reduced oil production per day and a reduced benchmark”, expressing hope that his administration would continue to deliver services to Deltans.

He informed Deltans that the “contracted budget” would be presented to the State House of Assembly before the first week of November 2019, stating that before December, it would have been passed.

Said him: “we are struggling to ensure that we present the budget of the state not later than first week of November and hoping that by the special grace of God because we are working very closely with the state house of Assembly and we will soon deliver the budget at the end of the year and have it also uploaded on the net because we want our budget to be the one that the people will be able to see, ask questions on and a budget that they can trust”.

He pointed out that the state would like to deliver a budget with a near 100 per cent compliance rate but added that in the situation where the state could not achieve the 100 per cent, it should be able to achieve between 80-90 per cent budget performance.

Meanwhile, reliably information gathered in Government House alleged that the governor was no longer interested in carrying out projects in the remaining years.